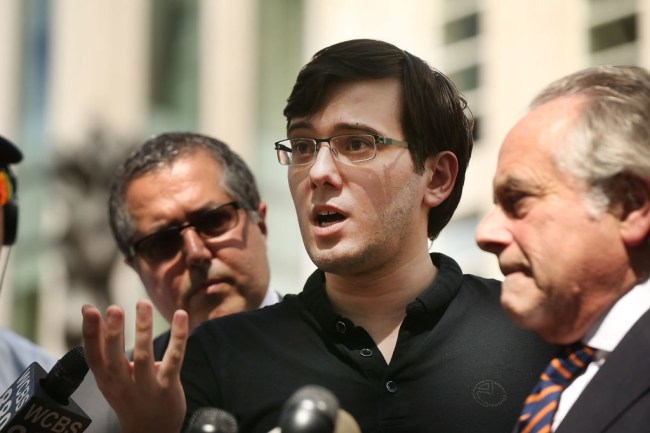 It’s been a busy couple of weeks for noted Terrible Person Martin Shkreli, who was recently thrown into one of the worst jails in New York City after having his bail revoked when he offered his Facebook followers a $5,000 bounty for a strand of Hillary Clinton’s hair for reasons he couldn’t even explain in court.

The ill-advised move came a week after the man with the world’s most punchable face listed the one-of-a-kind (and possibly fake) Wu-Tang Clan album Once Upon a Time in Shaolin on eBay. Shrkeli had originally paid $2 million to obtain the album back in 2015, but based on the result of the sale, it would appear the purchase wasn’t exactly his savviest investment.

When everything was said and done, the highest bid stood at $1,025,100, which means Shrkeli lost close to a million bucks by deciding to put the album up for sale.

Based on literally everything I know about Shkreli, there’s virtually no chance he doesn’t come out and say that such a small sum of money means nothing to him, but it’s still not the best look for someone who has done everything in his power to try and come off as an evil genius at seemingly every step of his saga. Those legal bills aren’t going to pay for themselves.

It’s not yet clear who placed the winning bid, but we can only hope they decide to share it with the world as opposed to playing it in the background of YouTube live streams.