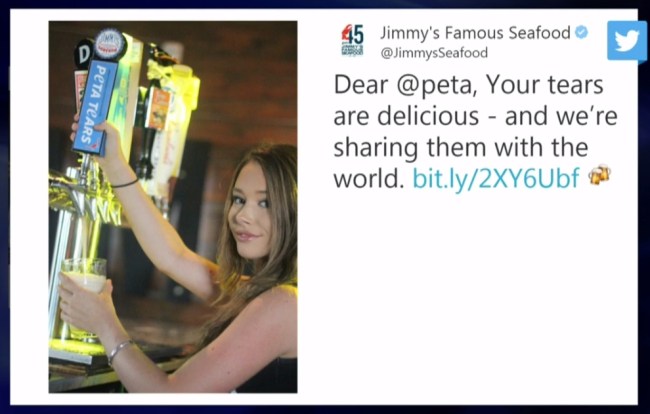 A Maryland crab restaurant has been engaged with an ongoing feud with PETA for months now that included a billboard war. Now, the Baltimore seafood restaurant has upped the ante in the conflict of crabs by releasing a new beer called “PETA Tears.” Savage.

#Baltimore is getting served some food for thought 🤔🦀 pic.twitter.com/iPRfvIlQB3

Jimmy’s Famous Seafood fired right back by posting photos of delicious crabs on Twitter and putting up their own billboard in Baltimore that said: “SteaMEd crabs. Here to stay.”

'Steam Them All': Jimmy's Famous Seafood Fires Back At PETA's Baltimore Billboardhttps://t.co/6Z5lR0yrOp pic.twitter.com/1J5iBJRU1g

Jimmy’s Famous Seafood has taken their battle with PETA to another level by releasing a new beer called “PETA Tears.”

After spending months of “perfecting” the lager with a local brewery, Jimmy’s Famous Seafood is now selling a limited run of PETA Tears lager, a traditional American blonde ale that pairs well with seafood.

RELATED: PETA Dared To Ask Why People Would Want To Eat Bacon And It Got Real Ugly, Real Fast

🍻 Dear @peta2, your tears are delicious! Join us in one week’s time as we debut our latest local brew – PETA Tears! For more information on this party, head over to our Facebook page! #GetFamous #SteamThemALL 🦀

“We’ve crafted a refreshing new locally brewed lager — PETA Tears,” Jimmy’s Seafood wrote on Facebook. “This golden masterpiece (4.9% ABV) is a limited-time release, and is perfectly paired with steamed crabs — and all other seafood! Turns out that their tears are in fact quite delicious!”

“We knew there might be some push back, but we’re ready for that,” said John Minadakis, the restaurant’s owner. “We’ll let the product speak for itself.” The beer is said to be a lot less salty than you’d imagine, but tasty never-the-less.

PETA Tears beer will be available throughout the summer, but if sales go over well, Jimmy’s hope to sell the lager nationally.

Jimmy’s Famous Seafood is using the feud to do some good. One dollar from the sale of every PETA Tears beer will go the “Show Your Soft Side” campaign, a charity that works to stop animal cruelty and provides funds for BARCS, Baltimore’s largest open-admission shelter.

PETA needs to take the “L” in their squabble with Jimmy’s Famous Seafood and turn to easier targets such as removing the imaginary cages for imaginary animals on the Barnum’s Animal Crackers box.

RELATED: Vegans Are Furious At Hyundai Super Bowl Commercial For Comparing A Vegan Dinner Party To The Worst Things Ever