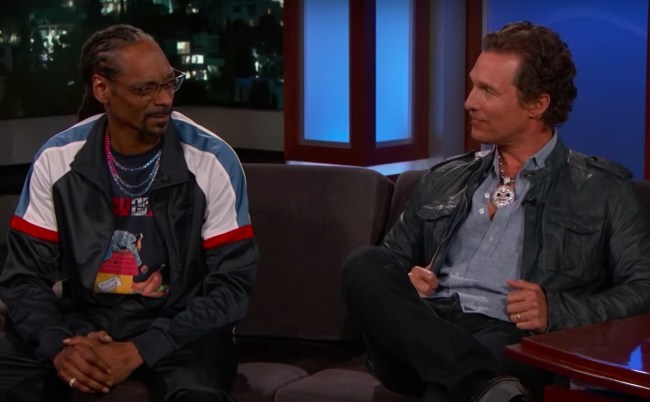 James Franco might have gotten a ton of praise for his uncanny portrayal of Tommy Wiseau in The Disaster Artist, but as far as I’m concerned, it didn’t even come close to topping his legendary performance in Spring Breakers, which is arguably his magnum opus.

In 2012, Harmony Korine masterfully trolled unexpecting viewers with Spring Breakers, which opens with a scene featuring a superfluous amount of beer chugging, exposed breasts, and Skrillex before thrusting a couple of former Disney Channel superstars into a surreal world filled with guns, drugs, and Gucci Mane.

It took a while, but the infamously bizarre Korine has returned with The Beach Bum, which features Matthew McConaughey playing a fantastically weird dude named “Moondog” and—if that somehow didn’t sell you already—a cast including Jonah Hill, Jimmy Buffett, and Snoop Dogg.

Last year, McConaughey chatted with Jimmy Kimmel about his experience on set and the actor revealed Snoop had managed to goad him into trying some of his famously debilitating marijuana.

On Thursday, McConaughey visited Kimmel yet again with Snoop Dogg in tow and the two men sat down for a fairly lengthy interview where they shed some light on their creative process—which involved smoking a ton of weed.

McConaughey revealed Snoop goofed him in the worst (best?) way possible while shooting a lengthy scene that put him in quite an interesting place:

So we go to do the scene and it’s about an eight-minute take, it was a long take if you’re passing a joint back and forth and you’re smoking hardcore to the heels of your feet. So the scene goes on and right after the scene I just feel like, man, I’m not sure of this prop.”