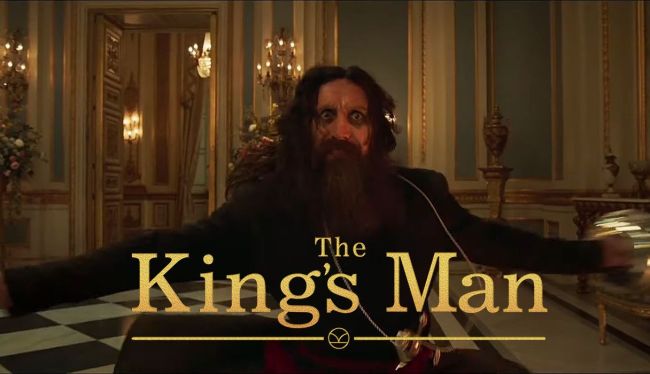 One of the common difficulties of making a successful movie franchise, particularly when it comes to the action genre, is that each film is virtually required to be bigger and badder than the last. This is why, among others, films such as Star Wars: The Empire Strikes Back, Lord of the Rings: The Two Towers, and The Dark Knight are considered to be superior to their predecessors.

The King’s Man is certainly not immune to this requirement, as the film has the tall task of living up to, and exceeding, the spectacle of the first two bonkers films. Luckily, that quest is greatly aided by the presence of Rhys Ifans’ Grigori Rasputin, who is genuinely one of the most insane movie villains in recent memory.

Beyond his general appearance and demeanor, Rasputin’s sense of menace comes from a specific and unique style of action that director Matt Vaughn basically invented himself:

“We were trying to find the physical language that was specific and unique to Rasputin and we were kind of struggling with that. And then [director] Matthew Vaughn burst into the stunt room one day and went, ‘I’VE GOT IT! – Russian dancing and martial arts, mix ’em up!’ And we’re all just standing there going, ‘…What?!’,” Ifans told our Post Credit Podcast.

“And then suddenly — the moves these Georgian guys do — these guys train from the age of three or four years old to pull these moves off. Even the stuntmen couldn’t do them. I literally had to learn it all. And a lot of the stuff I had to do, albeit on wires. There was one who specialized in floor work, one who specialized in aerial work. And I worked so intensely with these two guys and got very close to them. And they were as amazed by our world as we were by there’s — they had never been on a film set before, let alone a Matthew Vaughn film set.”

“It was this brilliant collision of cultures and disciplines. I helped them with Rasputin-izing the moves, adding little bits of humor and, dare I say, filth, into the proceedings. It was great to watch because it was a collaboration of the highest order. We all brought our best game to that. It was very satisfying to see the final product.”

I then couldn’t help but point out that the way in which Ifans described Vaughn, he sounded like something of an action movie mad scientist.

“Well, I think he’d quite take that as a compliment,” Ifans replied.

How did director Matthew Vaughn come up with the action for Rhys Ifans' insane Rasputin in #TheKingsMan?

RELATED: ‘The King’s Man’ Star Rhys Ifans On How He Created One Of The Most Insane Villains In Recent Memory (Exclusive)