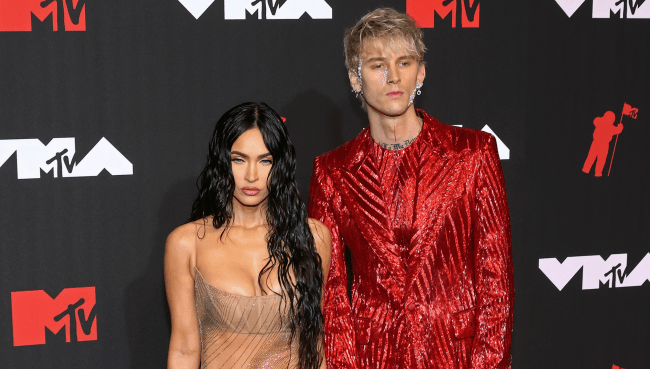 Machine Gun Kelly and Megan Fox so badly want to be seen as edgelords it hurts. They are trying so hard to be the Billy Bob Thornton and Angelina Jolie of the 2020s it won’t be long before they too will be wearing vials of each other’s blood on necklaces.

After being “stoned and murdered” by Hollywood, the 35-year-old Fox has used her relationship with MGK to rise from the obscurity that she fell into during the 2010s while married to Beverly Hills 90210 star Brian Austin Green.

By wearing outrageously revealing outfits and saying things like “I just remember this tall, blond, ghostly creature and I looked up and I was like, ‘You smell like weed.’ He looked down at me and he was like, ‘I am weed.’ Then, I swear to God, he disappeared like a ninja in a smoke bomb,” Fox is certainly made her way back on to the public’s radar.

Last week, the couple got engaged. Of course, they filmed the engagement for Instagram, as one does in 2022.

Of course, they couldn’t do it without some sort of weirdness with Fox claiming in the caption of the video that they drank each other’s blood after he popped the question. SO. FREAKING. EDGY.

This week, the couple talked about their engagement in a new interview with Vogue, because all the edgelords apparently read… Vogue.

Congratulations on your engagement, which has become a huge mega-story. Did you anticipate that?

Megan Fox: [To Baker] Are you aware of it? I don’t really look at social media or anything, so I don’t know.

But it came out on social media, right?

Baker: We released it to control the narrative. As opposed to someone just catching a weird cell phone picture of a ring on our hand and being like, whoa! But yeah, I didn’t expect it. I just recorded it on my cell phone. And it wasn’t like we had photographers or anything. It was just like me setting my phone against a cup.

She doesn’t look at social media. Suuuuure, she doesn’t.

“It’s a thoroughbred Colombian emerald, with no treatment,” he said. “It was just carved into the teardrop, straight out of the mine. And the diamond was directly from Stephen [Webster]. The concept is that the ring can come apart to make two rings. When it’s together, it’s held in place by a magnet. So you see how it snaps together? And then it forms an obscure heart. And you see this right here? The bands are actually thorns. So if she tries to take it off, it hurts…”