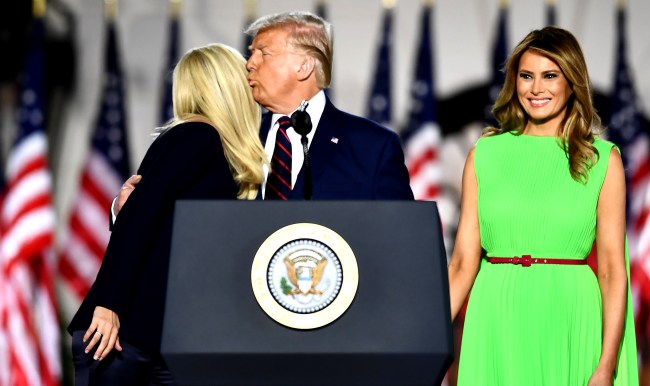 Public figures should be well versed by now in what things they should not do when being photographed. Among them are (1) holding up a piece of paper or poster that can be easily erased and replaced with… whatever, (2) make unusual faces, and (3) wear any solid color outfit, especially green, that can be quickly altered with Photoshop and turned into a meme.

This is especially the case with anyone associated with the President of the United States, because, well…

Donald Trump Jr. in the Oval Office. "Father, I have logged on. Father?" pic.twitter.com/CjRqxbh6oQ

when you thought you wouldn't have to stop until the next rest area pic.twitter.com/LmnxywtLSa

Despite all of that, First Lady Melania Trump decided to rock a solid lime green dress on stage for the Republican National Convention this week.

What is she thinking? pic.twitter.com/rFufrgMb

She obviously wasn’t thinking about the memes that would be spawned by such an easy to graphically manipulate dress because it took the internet, oh, about 14 seconds to go to work.

It was on this day that melania trump made trolling history by wearing a chroma key green dress. pic.twitter.com/WsNIQN4boT

Ohh Melania, didn’t you learn from the Queen? #MelaniaGreenScreen pic.twitter.com/CgizBkCOZz

On the plus side for Melania, her dress completely distracted everyone from the fact that she appears to really hate Ivanka.

That’s what happens when a stepmom and a daughter are both interested in the same man, and I am not talking about Donald.

Melania is ready to risk it all #Trudeau pic.twitter.com/lEz5sjuQBD

Ivanka looks at Justin Trudeau the way I look at pizza pic.twitter.com/hGSEnr5Sol

Keep up the great work, internet.