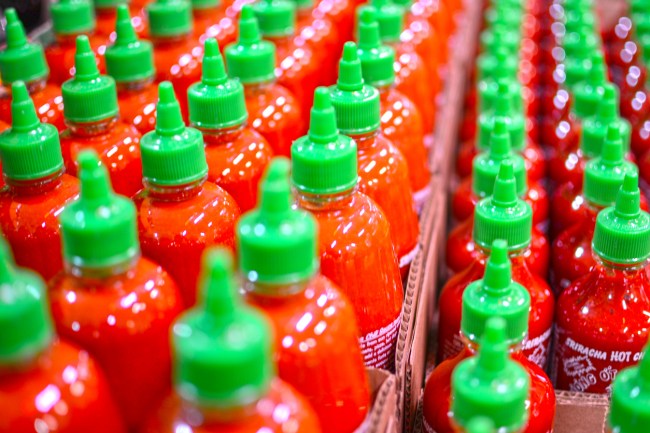 Ever wonder why sriracha is so addictive? If you purchased this “special” hot sauce, it could be because your sriracha had meth in it.

Four men have been arrested after Australian authorities found 880 pounds of crystal meth in 768 bottles of sriracha. Everyone right now is running to their kitchen to empty out their hot sauce bottles to see if there is any crank inside.

The Australian Border Force discovered the methamphetamine in boxes of the popular chili sauce that were imported to Sydney, Australia, from the United States on October 15. Could this be another spin-off of Breaking Bad where Heisenberg hides meth in hot sauce instead of Los Pollos Hermanos fry batter? Or is this an alternate ending for El Camino where Jesse Pinkman moves on from Emilio Koyama’s death and starts making their signature “Chili P” meth again that had chili powder as an ingredient?

Australian police searched a vehicle in the parking lot and discovered eight boxes of sriracha bottles, bags, box cutters, and gardening gloves. Authorities then obtained a search warrant for a hotel suite that the men were staying at. Inside was another 26 boxes of sriracha. The men were charged with attempt to possess a commercial quantity and the unlawful importing of a border controlled drug.

Australia’s New South Wales (NSW) Police stated, “with presumptive testing returning a positive indicator for methylamphetamine (ice)” in a statement on Thursday. The street value of the crystal meth is said to be worth $210 million.

If you doused some sriracha on your pho or chicken wings and then couldn’t fall asleep because you were obsessively cleaning your air vents all night long, your hot sauce may have had meth in it.

“This has been a complex investigation, and we know the methylamphetamine in this import was headed for a clandestine lab in the Sydney Metropolitan area for the extraction process to occur,” State Crime Commander Stuart Smith said in a statement.

“This detection should serve as a warning to criminal groups that no matter how clever you think you are being in the way that you attempt to conceal and move your drugs, our officers have the skills, technology and the resources to find them and track down the people who are attempting to bring them in,” said Matt O’Connor, the Australian Border Force regional commander for NSW.

No wonder why you put that sh*t on everything.