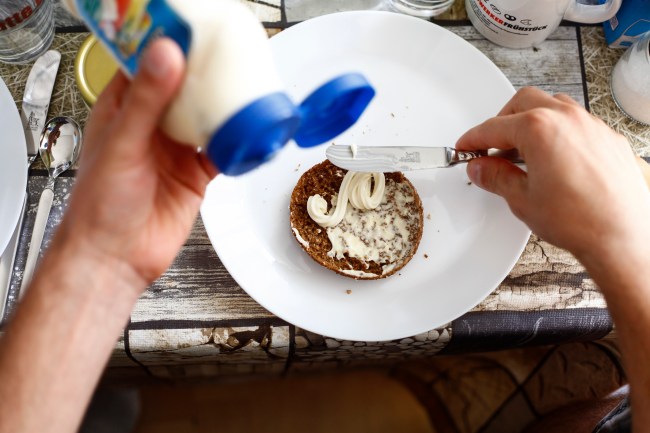 Among the many things on this earth that make me feel like a weak, half-man, it’s my phobia for mayonnaise. The mere sight of the jiggly, devil-paste makes my skin crawl. There are many who hold the opinion that mayo is gross, but those who know me know that it goes beyond preference and enters the realm of ‘irrational fear’ territory. I once made a poor Quizno’s employee make me a whole new sandwich after he used a knife that still had streaks of mayo on it–“I’m deathly allergic,” I say, with my voice quivering and pride swallowed.

So, if millennials succeed in killing mayonnaise, we should go down as the greatest generation to walk the earth, in my correct opinion. It would be the greatest casualty in a plethora of things we have apparently already murdered:

In a recent article in Philadelphia Magazine titled ‘How Millennials Killed Mayonnaise,’ the author, Sandy Hingston, essentially chastises an entire generation because his daughter doesn’t like his potato salad. Ok, that’s a bit simplistic but check out this pompous line:

But for the most part, today’s youth would sooner get their news from an actual paper newspaper than ingest mayonnaise.

Says the guy who wrote the online article.

I honestly cannot believe this article isn’t a parody pic.twitter.com/1i1bvuB9fN

Yep, he just used the phrase ‘identity condiments,’ like we’re all dying to hike up a mountain and declare we’re the RELISH PEOPLE!

Here are some poignant reactions from millennials who are sick of being accused of another count of murder:

There is absolutely no threshold for how stupid a "Millennials are Ruining X" op-ed can be. https://t.co/HHy5AJEUZX

Old people: MILLENIALS ARE ALL FAT AND LAZY!

Also old people: WHY AREN'T YOU MILLENIALS EATING THIS ULTRA-CONCENTRATED FORM OF CALORIES WITH NO FLAVOR?!https://t.co/AIaIh5hrSw

Hey Sandy, we’re not killing the condiment you use to whack it, there are just more options now. Believe it or not, people are eating more than bologne sandwiches.

“Condiments are more competitive than they’ve ever been,” Jennifer Healy, head of marketing for the Heinz brand, told the Wall Street Journal. “Ten years ago, it was much more simple.” [via]

According to Euromonitor, mayonnaise sales fell 6.7% in the US between 2012 and 2017, the Wall Street Journal reported. The Journal reports that brands like Hellmann’s and Kraft have had to slash prices to keep shoppers interested, with mayonnaise prices falling 0.6% from the first quarter of 2017 to 2018, as overall packaged-food prices increased by 1.6%, according to Nielsen data.