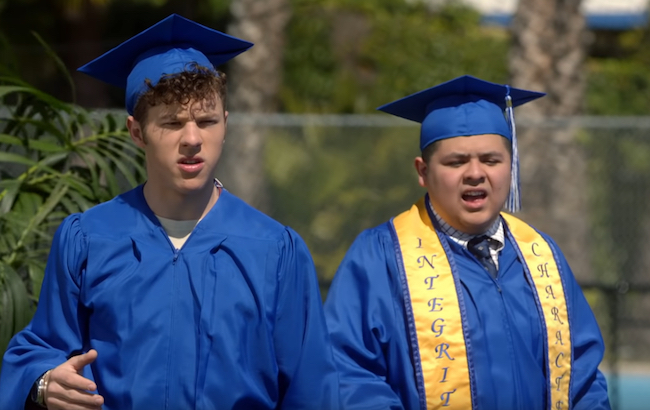 Nolan Gould grew up on television as Luke Dunphy.

The “Modern Family” star was just 10 years old when the show debuted back in 2009.

While the rest of the world focused their eyeballs on his fictional and fine-as-hell sisters – Sarah Hyland and Ariel Winter – Gould has slowly evolved into a solid comedic actor and a surprisingly shredded dude.

Gould graces of the cover of the latest issue of C’est Prune magazine and the mag posted photos of his spread to their Instagram page.

The kid must have been banging out push-ups during the filming of the show’s final season.

Gould spoke to the magazine about his decade filming the show and how his mind plays tricks on him because he started acting at such a young age.

C’EST_PRUNE: How do you relate to Luke Dunphy?

NOLAN: I didn’t used to when the show first started but as the years go on it’s getting harder for me to separate us in my mind. Sometimes, especially from the earlier episodes, I can’t remember if I actually did something or if it was just me acting. I guess spending half of your life as someone else will do that to you.

Gould also discussed the best and worst parts about filming the show and the one place every person should visit because it “looks like something out of a storybook, or ‘Game of Thrones’.”

The actor doesn’t mention any specifics about staying in shape, but the dude is 20, which helps a lot.

If you’re looking for exercise tips, check out our fitness section.

Our first piece of advice would be to get out and move and stop watching “Modern Family” marathons.