Monkeys Go On Rampage, Killing Over 200 Dogs In What Locals Say Are ‘Revenge’ Attacks 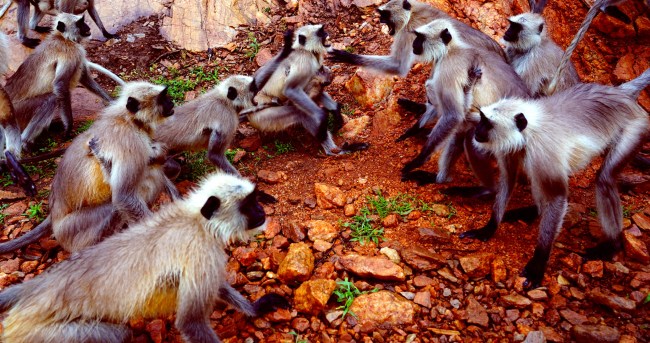 Do you know what you don’t do? Mess around with monkeys. Because if you do, they will form gangs, take over your buildings, steal your stuff, go on rampages, and, apparently, go on killing sprees.

The latter is what has been happening in a small village in India where some monkeys have been kidnapping and killing an estimated 250 dogs as some sort of “revenge” plot after a dog allegedly killed a baby monkey, say villagers.

According to news18.com in India…

After a few dogs allegedly killed a monkey infant, troops of the area have been on a rampage killing pups. In the past month, monkeys were said to have killed around 250 pups by throwing them down from heights.

This strange incident took place in Majalgaon in Beed district. The moment a troop of monkeys in the area see a pup, it catches the pup and takes it to a place of considerable height and throws it down. It is said that in the past one month monkeys have killed at least 250 pups.

These monkeys, which were just recently captured, had been kidnapping the dogs and dropping them to their deaths from tall buildings and trees.

Some villagers who were attempting to catch the monkeys and save some dogs were also attacked by the primates and fallen from buildings and been injured.

Monkeys have killed almost all the pups in the village and now, villagers say that there are hardly any pups left in their village. But monkeys have not stopped. Troops have started targeting small kids. School-going kids are being attacked by the monkeys and this has created panic among the villagers.

Newsweek reports that after around three months of chaos, the monkeys were finally trapped on Sunday and released into their natural habitat.

“Two monkeys involved in the killing of many puppies have been captured by a Nagpur Forest Department team in Beed,” Sachin Kand, Beed forest officer, told India’s ANI news agency.

Maharashtra | 2 monkeys involved in the killing of many puppies have been captured by a Nagpur Forest Dept team in Beed, earlier today. Both the monkeys are being shifted to Nagpur to be released in a nearby forest: Sachin Kand, Beed Forest Officer pic.twitter.com/3fBzCj273p

Area resident Radhakishan Sonawane told Press Trust India (PTI), that some of the dogs actually died from just being left on roofs or other high places by the monkeys.

“At such heights, these puppies don’t get any food or water. Hence they died naturally many times. But sometimes they fell from a height and died. Over 200 puppies had lost their lives in our village,” he said.

Villagers became concerened that when the dog populaton was exhausted the monkeys would turn to people, especially small children. Some reports say that had already begun occurring.

DailyMailOnline.com reports that an eight-year-old child was “grabbed and dragged away” by the monkeys until villagers scared it off by throwing stones at it.

“Monkeys generally don’t attack human beings but people are afraid. Some people were injured in the past few days while running away from these monkeys. However, no incident of any monkey bite was reported in this village,” said Range Forest Officer Amol Munde.