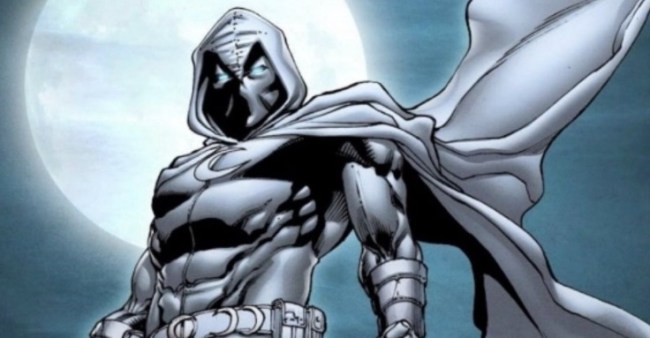 UPDATE: Welp, nevermind: according to reports, Oscar Isaac has landed the role of Moon Knight.

Of all the Marvel Cinematic Universe TV series that are set to debut on Disney+ in the coming years, the one that intrigues me most has long been Moon Knight as the character would represent something new in the MCU.

Essentially a darker and more deranged version of Batman, Marc Spector — who, similar to Batman, is also a wealthy entrepreneur — is a former boxer, CIA agent, and mercenary who suffers from multiple personality disorder and was left to die in an Egyptian desert before being saved by the Egyptian moon god Khonshu, who offered Spector a second chance at life. Long story short, Moon Knight clearly isn’t the traditional happy-go-lucky superhero we’ve come to expect from the MCU and that’s exactly what makes the character, and the series, such an exciting addition to the franchise.

Now, that said, my hype for Moon Knight will be severely shattered if these latest casting RUMORS are true, as Murphy’s Multiverse is reporting that Hamilton and Snowpiercer (the TV show) Daveed Diggs and Big Mouth star Nick Kroll were being eyed for the role.

Like She-Hulk, however, it’s also been rumored for some time that the studio has settled on their lead actor. I heard whispers as far back as August that the studio had found their Marc Spector and have done everything I could to try to uncover the identity of the actor but ran into roadblocks at every turn. This weekend, however, a very trusted source shared a couple of names with me that he had heard associated with the role. According to the source, Marvel Studios showed interest in actors Daveed Diggs and Nick Kroll for the role of Marc Spector.

Diggs and Kroll both fit the mold while breaking it at the same time. Given the prominent role that Spector’s Jewish background plays in the comics (his father is a rabbi), it’s been the popular opinion that Marvel Studios would seek out a Jewish actor to portray Spector and both Diggs and Kroll fit the bill there. [via Murphy’s Multiverse]

Personally, I’ve long been partial to the idea of Shia LaBeouf playing the Moon Knight character, as he not only checks the all-important Jewish box, but he also has a history of mental illness, which is yet another of Moon Knight’s defining characteristics. The internet also likes the idea of The Haunting of Hill House star Oliver Jackson-Cohen playing Marc Spector.

While I could live with the selection of Daveed Diggs (his mother is Jewish), casting the inherently comedic and frankly goofy Nick Kroll in what could and should be one of the MCU’s darkest roles would undermine the very appeal of the character.