Moon Landing Hoax Constantly Debunked, So Why Is It Taking So Long To Go Back? 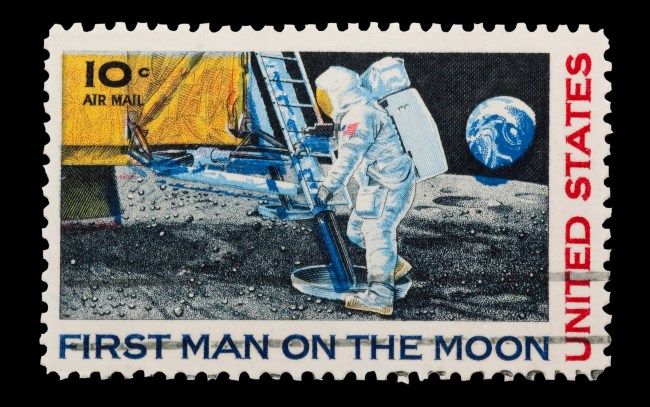 “An unexciting truth may be eclipsed by a thrilling lie.” – Aldous Huxley

It has been 50 years since the United States claims to have successfully landed astronauts on the moon with its Apollo 11 mission, and ever since then, conspiracy theorists have come out in droves to call bullshit. A slew of discrepancies has been pointed out in the footage from the historical event that they say proves the U.S. government conned the American people into believing that it took one giant leap for mankind when, in reality, those moon boots are full of crap. Otherwise, why else would the U.S. flag be flapping in zero wind, and why are there no goddamned stars present in those photos of the night sky? Some have even gone as far as to suggest that the moon landing was actually produced by legendary director Stanley Kubrick in a studio someplace – possibly at the Area 51 Air Force testing range in Nevada. Even to this day, roughly 10 percent of Americans believe the moon landing is a bunch of bologna. And I’m one of them.

Listen, I know what some of you are thinking: Man, this dude is crazier than a shithouse rat. All of those conspiracy theories have been debunked throughout the decades. We know the flag was fitted with a horizontal rod to give it the effect of waving in the wind. And there are no stars in those photos, as one astronomer recently told talkRADIO, because “the astronauts landed on the day side of the moon so you had the glare of the sun. The stars didn’t really show up on the pictures.”

But riddle me this, sheeple: How did Buzz Aldrin and crew escape the killer effects of the Van Allen radiation belts when, by NASA’s own admission, they didn’t have the proper equipment to protect them? Even in this day and age, combatting radiation is still a critical problem for space crews. What about the fact that Bill Kaysing, who was actually part of the U.S. program responsible for designing Apollo’s rocket engines, said there is no way that design ever took us to the moon. And where are all of those moon rocks that we supposedly collected? Oh, and how come astronauts could communicate with Earth (nearly 240,000 miles away) using an old school VHF band radio, and I still can’t get a decent enough cell signal in parts of the city? But most importantly, if the United States was smart enough to run successful moon missions more than five decades ago, why in hell’s holy name is it taking us so long to go back? Hmm, now who’s the crazy one?

It’s not that the United States no longer has an interest in the moon or that there’s no more showdown between the U.S. and Russia to be the first to swing their dicks on the lunar surface. The Trump Administration announced last year that it wants astronauts back on the moon by 2024. This deadline struck me as odd considering that the nation’s scientific minds should, at the very least, have the necessary plans tucked away somewhere in their archives on how to have another crew bouncing around up there in no time. Think about how much technology has advanced in just the past ten years – much less the past five decades — and you’re telling me that NASA doesn’t have the wherewithal to put a couple of space cadets on the moon this weekend?

It all sounds fishy if you ask me. But, as it is typical in the good old U.S. of A, no one is asking questions – not even in Washington D.C.

In their latest party platform, the Democrats recently signed on supporting Trump’s plan “to return Americans to the moon and go beyond to Mars, taking the next step in exploring our solar system.” The goal of the program, something that is being referred to as Artemis, is to build a permanent space base on the lunar surface so the United States can learn more about the moon and search it for resources. They say they want to see if there is water on the moon for future astronauts to drink. Well, we’ve got water down here, why not take a few bottles with you?

What they’re really trying to do is lay claims to the damn thing so no one else can. That’s the American way! Even though the Outer Space Treaty of 1967 technically prohibits any one nation from owning the moon, that doesn’t mean we won’t give it a try. But why can’t we just blast up there right now, stick a new flag in the ground and get on with our relentless boner for conquering everything already? Some reports claim it’s because NASA has to create new rockets (to replace the ones that Kaysings says would have never worked for Apollo), and they are trying to do it on a tighter budget than what was spent back in the day. They say it’s harder to convince the American people to cough up $35 billion to go play in space than when Kennedy was president.

But since when has money or the opinions of the American citizen ever stopped the federal government from doing anything? We’ve been footing the bill for decades on wars, golf trips, useless research, and nobody has ever asked us what we think or if we mind. No, the hold-up, you can almost bet on it, rests on NASA’s inability to make good on Trump’s promise to Land on the Moon Again. NASA doesn’t have a damn clue how to put a man on the lunar surface because THEY’VE NEVER DONE IT BEFORE. They’ve got four years to figure out how to pull off a 50- year-old lie.

All of this space talk is just a bunch of B.S. anyway, to keep the American people thinking that we’re making strides to visit other planets to further protect the safety of the nation and also provide us with options after the Earth becomes uninhabitable. (Insert fart noise here). Like the late, great George Carlin once said, “the planet is fine, the people are fucked.” As we’ve seen during the past six months of half-assed lockdowns stemming from some mysterious virus, nature finds a way to bounce back when humans aren’t around. With fewer carbon emissions, air pollution has dropped in most places, and with less of us out there running amok, wildlife is thriving and coming back around. The planet is a resilient force, so all it’s going to take for Earth to make a comeback is for the human race to go away — to go bye-bye forever. Late physicist Stephen Hawking said right before his death that our demise was coming, potentially within the next century, due to our luck running out on epidemics, passing asteroids, climate change and an increasing population.

Listen, the United States doesn’t need to go to the moon or inhabit other planets to sustain the American people. We only want to do it to capitalize on a space economy before someone gets there first. Truthfully, you’d have to be nuts to leave here for a new life on the moon or Mars anyway. These places are cold as fuck, you can’t breathe up there, and the consumption of beer is a rather complicated task. So, perhaps rather than figure out how to go to the moon, the U.S. government should think about hiring director Roland Emmerich and just fake it for another 50 years. It’ll be cheaper, and most Americans will buy into the scam just the same as they did the first one.