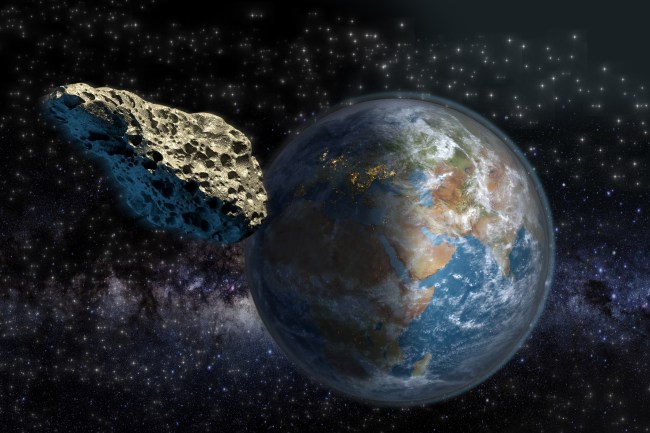 You can now add a potential asteroid strike to your 2020 apocalypse bingo card.

According to NASA JPL’s Center for Near Objects Studies, an asteroid is projected to fly past Earth on Nov. 2, the day before the U.S. presidential election.

The 6.5 feet in diameter asteroid is not considered dangerous but scientists are keeping a close eye on it considering it has a .41 percent of hitting the Earth.

NEW: NASA predicts an asteroid will pass close to Earth the day before the election

Its diameter is 0.002 km, or about 6.5 feet, according to NASA’s data. It was first identified at Palomar Observatory in California in 2018.

NASA says there are three potential impacts, but “based on 21 observations spanning 12.968 days,” the agency has determined the asteroid probably — phew! — won’t have a deep impact, let alone bring Armageddon.

Of course, people on the Internet immediately had to crack jokes about the asteroid.

It’s 2020 so an asteroid is headed toward Earth on the day before the election. NASA says the chance of it actually impacting Earth is 0.41%, so you can pretty much count on it. pic.twitter.com/7KkZOBrYd7

it should hit, humanity was a mistake https://t.co/6qAELgvXZA

Turns out the asteroid is traveling priority mail so it won’t get here until three weeks after the vote. https://t.co/crurxrDcug

"Armageddon" 2020 reboot – a plucky bunch of oil drillers are sent to the asteroid to see if they can make sure it hits the earth https://t.co/Y9KEuDrBFW