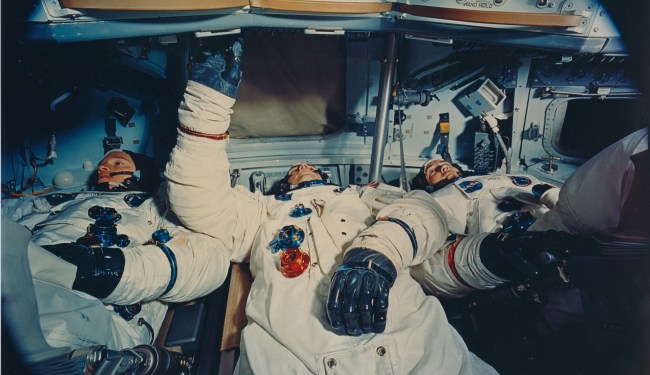 Former NASA astronaut Rusty Schweickart was the Lunar Module Pilot for the Apollo 9 mission (that’s him on the left above).

Launched on March 3, 1969, Apollo 9 was just the third manned spaceflight in the Apollo program and the first flight of a full Apollo spacecraft with a Command and Service Module along with a Lunar Module.

When it was completed, the mission was deemed “as successful a flight as any of us could ever wish for” by NASA Associate Administrator George Mueller and would officially open the door for NASA to attempt to land on the moon with Apollo 11.

However, it wasn’t without its close calls, according to Schweickart.

While in low-Earth orbit, Schweickart revealed to the European Space Agency (ESA) that as he, McDivitt and Scott simultaneously noticed an unusual flash outside the spacecraft.

“During the Apollo 9 mission we were dark-adapted for an experiment, looking at the spectacular night-time Earth, watching weather fronts, thunder storms and lightning, a really great sight out of the window,” recalled Schweickart.

“Then, who knows who said it first, but one of us said they saw a little flash down there and someone else says ‘yeah, I saw it too,’ but you wouldn’t have mentioned it if the first person hadn’t said it.

“And then we realized: that was a meteor, burning up below us. Wow, below us – which meant it came down through our altitude!”

Considering the fact that we have left so much debris floating around Earth that it may inhibit our ability to travel into space in the future, it’s surprising that stories similar to Schweickart’s aren’t more common amongst astronauts.

Schweickart recounted his story while discussing the ESA’s proposed Hera mission, which will study what occurs when NASA, ESA and other space agencies intentionally crash a spacecraft into the Didymos B asteroid at over 14,000 mph sometime in 2022.

“We’re discovering more and more asteroids, and if we find one headed our way, what can we do? Is technology at a point where there’s anything we can do? The answer was a tentative yes, so we formed the B612 Foundation to advance the idea of deflecting asteroids,” said Schweickart.

The B612 Foundation was founded for the purposes of protecting Earth from asteroid impacts – something that we need more and more of with each passing year.