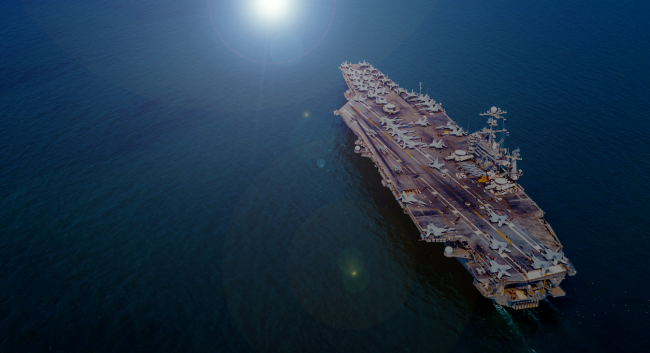 For whatever reason, the most frequent reports of UFO activity around military personnel seem to occur in one of two places: near U.S. Navy warships and around nuclear weapon facilities.

The latest mysterious military UFO encounter to have been discovered and discussed involves Navy personnel who were on board the USS Ronald Reagan back in 2004.

This particular UFO encounter has been described by witnesses on board the ship as perhaps “another form of life” and “didn’t look solid, but it had a shape to it.”

Numerous witnesses to the event spoke with The Debrief recently about what they saw and experienced in 2004.

“I’m pretty sure ‘it’ was there,” said Karol Olesiak, a 3rd class petty officer and Quartermaster on the Ronald Reagan at the time. “And they were like, ‘I don’t know what that is. I don’t care.’ You know what I mean? Like they had an attitude like ‘I’m going to my rack. I don’t care. … don’t even bother me about this sh-t’… So this ‘thing’ is there, the entirety of my watch and because the officers are ignoring it, I’m forced to ignore it,” adding, “It’s a problem when somebody says that it’s a problem. It’s a problem when somebody tells you that it’s a problem.”

“I’m sitting here looking at this thing, and I couldn’t tell what it was,” Seaman Derek Smith told The Debrief. “There was a shape to it. It was oval-shaped… it didn’t look solid, but it had a shape to it.”

“I just saw this orange, bright orange ball, and it was wavy, but somehow still solid like a plasma almost,” said Seaman Patrick Gokey. “And it just appeared over the flight deck. Maybe 200 feet off the flight deck. It sat there for about 30 seconds.”

He continued, “It didn’t seem to move at all, we were moving during flight ops, and it seemed to stay with us. But without any movement that you could discern. After that, it just did three half circles, just 1, 2, 3, and it was gone. I mean just in the blink of an eye, it was gone. And so that was pretty weird and, you know?”

Of the ten Navy vets, five are primary witnesses who personally saw the object and recalled the event independently. Several of these individuals had never talked about this incident in the 18 years since it occurred. While the majority of them do not recall the exact date and time, they do say they remember what they saw. Details vary slightly, but there were no widespread differences in statements or obvious indications of deceit. According to each of them, many more of their shipmates witnessed the event from the flight deck or the various other bridges and departments. Estimates range from 50 to 300 other people present during the hours-long event, they say.

The lack of response from the officers of the watch and orders to not log the event is also puzzling, but possibly explainable as an unwillingness to recognize a bizarre phenomenon in an era where people who reported UFO sightings were still being stigmatized. It could also affect career advancement, according to pilots and officers we’ve spoken with.

The USS Ronald Reagan, a nuclear-powered Nimitz-class supercarrier, is far from the first American warship to encounter mysterious unidentified objects following it.

Back in July 2019, the Navy’s USS Omaha was swarmed by as many as 14 unidentified flying objects. The USS Nimitz, perhaps most famously, had an unexplained encounter with a UFO in 2003. While numerous Navy pilots have reported similar experiences.