Six Degrees Of Kevin Bacon? Nah, Netflix Claims Everyone On Earth Has Six Shows In Common 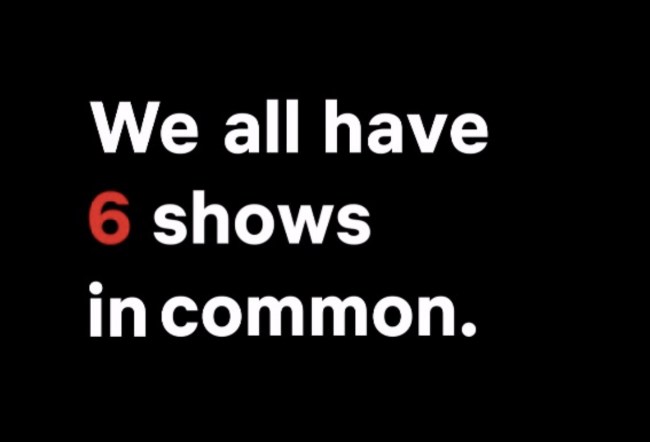 Tracing it back to Kevin Bacon, it’s a game where the goal is to link back any actor to Kevin Bacon within six movies. So Tom worked with Jane who worked with Kevin Bacon, game over. Now, Netflix just entered the ring with a new theory that states everyone on the planet has at least six shows in common.

Netflix released this short clip celebrating their findings and it carries the caption ‘Any two Netflix members, anywhere in the world will share an average of six shows in common. Don’t believe me? Go try it out!’

If you’re wondering how Netflix came up with this information, the streamer studied its 139 million paid memberships in over 190 countries and the research shows the Six Shows Statistic: The average number of shows shared between two randomly paired Netflix active accounts is 6.2. Both accounts had to have watched at least one episode of the show in common or 70% of the film in common in the past year. (via Forbes)

Honestly, six seems too low. Unless the person doesn’t own a TV set and/or doesn’t watch movies/TV it seems like you’d be able to find commonality on a shit ton more than six, wouldn’t you?

According to Forbes, Netflix’s goal here was to find the shared commonality connections across the entire planet. The idea being that someone from Birmingham, Alabama could meet someone from Jakarta and they’d still have at least 6 shows in common.

The issue here is that someone like myself who watches several new TV series a week could spend a fucking lifetime going through the list of shows they’ve watched and enjoyed in order to find that commonality. I think it’s only a matter of time before Netflix allows you to plug in your Netflix profile alongside someone else’s so you can see all of you shared programs. It wouldn’t take them more than a few hours to build out this technology if they haven’t already and it would end up bringing them a ton of new data.