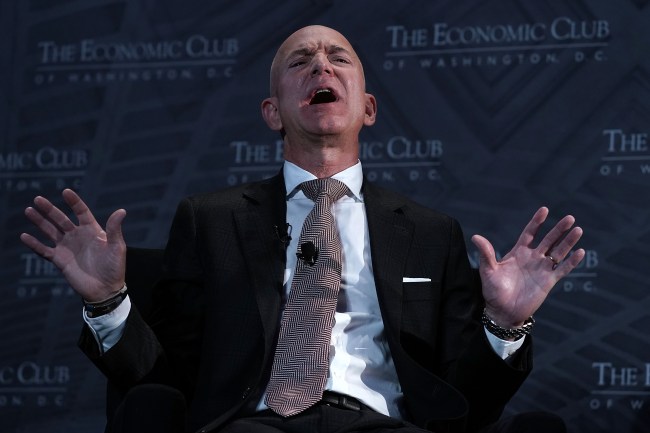 Amazon unveiled its plans for the centerpiece structure at its new Virginia-based second headquarters, and boy, it’s gorgeous:

Amazon’s plans for its new Virginia headquarters feature a 350-foot structure dubbed the Helix with two spiraling outdoor walkways with trees and plants from Virginia that twist to the building’s top. https://t.co/VGWTclnW1x via @WSJ pic.twitter.com/EfySgbXWvA

New rendering of @amazon HQ2 building- wondering if Nick Fury's aircraft carrier is going to launch out of Roaches Run in front of it…… @kcristol @Lopez4VA @AdamEbbin pic.twitter.com/6R7mfPEHvy

Phase two of the company’s development in Arlington, Va., calls for three 22-story office buildings and smaller retail buildings surrounded by woodlands, an outdoor amphitheater, a dog run and parking for around 950 bicycles.

The centerpiece will be the site’s fourth and tallest tower, a 350-foot structure dubbed the Helix because it will feature two spiraling outdoor walkways with trees and plants from Virginia that twist to the building’s top.

Yep, definitely a good miss for New York City. You may recall that in February of 2019, Amazon cancelled its plans to build a new headquarters in Long Island City, Queens, due to intense backlash from “lawmakers, progressive activists, and union leaders” (NYT). Even though both De Blasio and Cuomo courted Amazon, Bezos kinda picked up his ball and went home. And by home, I mean to northern Virginia, where he’s now creating what looks like a Tony Stark wonderland. And as a New York City resident, I have to say that it feels like we lost. Bigtime. Buildings that look like conch shells? You bet I want that where I live.

A coworker of mine told me that I should consider myself lucky. He lives in Seattle and says that Amazon employees are an entitled bunch, and that they changed the vibe of the city, pushing out the grungy coffee/music crowd and creating a vortex of hatred towards anyone who works for the tech giant. I understand that. I hate nerds as much as the next lax bro. I’d love to shove a few in the next Amazon locker I see.

But you know what? As far as the skyline of Queens is concerned, I wouldn’t mind looking at that glass tornado of wisdom and technology. It wouldn’t suck to have campus police whirring around on Segways and motorized scooters, or having robot garbagemen keep the streets around HQ2 cleaner than Singapore. It wouldn’t be terrible to get invited by a friend with an employee badge for lunch, where I’m sure everything is free—sushi, finger sandwiches, lettuce wraps, rice bowls, whatever—and they have unlimited Nantucket Nectar juices in glass bottles with fun facts about Nantucket under the cap. I’ll take pretentious tech nerds looking down their noses at me over dingleberry-chewing nutjobs trying to push me onto the subway tracks ANY day.

Of course it’s hard to say what the headquarters might have looked like in Queens. But I bet you it would have been cool. If they drummed this up in Virginia, one can only imagine what they might have put together in New York. I can tell you one thing: La Guardia’s construction would be done by now. That’s for sure.

WOW, Jeff Bezos is stepping down as CEO of Amazon — will become executive chair. pic.twitter.com/cEAt9oeLr1