Recently Discovered Solar System Is Our Best Chance Yet For Finding Aliens, According To Scientists 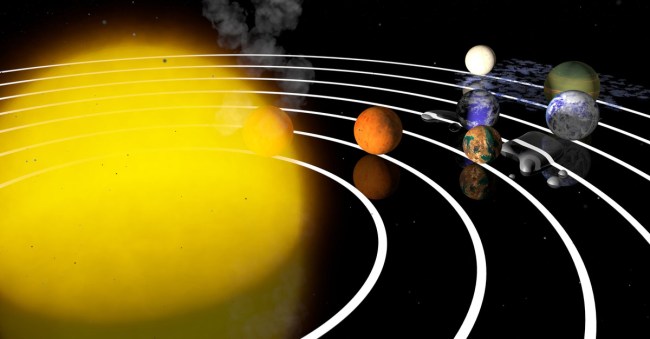 In March of 2017, NASA announced that they had discovered a new solar system consisting of seven “Earth-sized” planets orbiting around a star they named TRAPPIST-1. (That is an artist’s rendering of the solar system in the illustration above.)

Back then, Thomas Zurbuchen, associate administrator of the agency’s Science Mission Directorate in Washington, stated, “This discovery could be a significant piece in the puzzle of finding habitable environments, places that are conducive to life. Answering the question ‘are we alone’ is a top science priority and finding so many planets like these for the first time in the habitable zone is a remarkable step forward toward that goal.”

This solar system, located just a hop, skip and a jump from Earth — 40 light-years (or 235 trillion miles) — has been studied by NASA for the past year and their scientists have come up with some very interesting new observations.

Researchers determined that all of the planets are mostly made of rock. Additionally, some have up to 5 percent of their mass in water, which is 250 times more than the oceans on Earth.

The form that water takes on TRAPPIST-1 planets would depend on how much heat they receive from their ultra-cool dwarf star, which is only about 9 percent as massive as our Sun. Planets closest to the star are more likely to host water in the form of atmospheric vapor, while those farther away may have water frozen on their surfaces as ice. TRAPPIST-1e is the rockiest planet of them all, but is still believed to have the potential to host some liquid water.

The question of the planets’ atmospheres is also important for understanding whether liquid water could be present on these surfaces — an essential ingredient for habitability.

Habitability?! That means ALIENS, RIGHT?! Or does it just mean we might be able to move there once we inevitably use up this planet?

Hubble reveals that at least three of the TRAPPIST-1 planets — d, e, and f — do not seem to contain puffy, hydrogen-rich atmospheres like the gas giants of our own solar system. Hydrogen is a greenhouse gas, and would make these close-in planets hot and inhospitable to life.

“No one ever would have expected to find a system like this,” said team member Hannah Wakeford of STScI. “They’ve all experienced the same stellar history because they orbit the same star. It’s a goldmine for the characterization of Earth-sized worlds.”

Okay, cool, so what’s our next move, folks?

The Hubble team plans to conduct follow-up observations in ultraviolet light to search for trace hydrogen escaping the planets’ atmospheres, produced from processes involving water or methane lower in their atmospheres.

Astronomers will then use the Webb telescope to help them better characterize those planetary atmospheres. The exoplanets may possess a range of atmospheres, just like the terrestrial planets in our solar system.

“One of these four could be a water world,” Wakeford said. “One could be an exo-Venus, and another could be an exo-Mars. It’s interesting because we have four planets that are at different distances from the star. So we can learn a little bit more about our own diverse solar system, because we’re learning about how the TRAPPIST star has impacted its array of planets.”

Alright then, when can we visit? Because NASA’s description of being on one of the planets sounds pretty dope.

“The TRAPPIST-1 planets huddle so close to one another that a person standing on the surface of one of these worlds would have a spectacular view of the neighboring planets in the sky. Those planets would sometimes appear larger than the Moon looks to an observer on Earth. They may also be tidally locked, meaning the same side of the planet is always facing the star, with each side in perpetual day or night.”