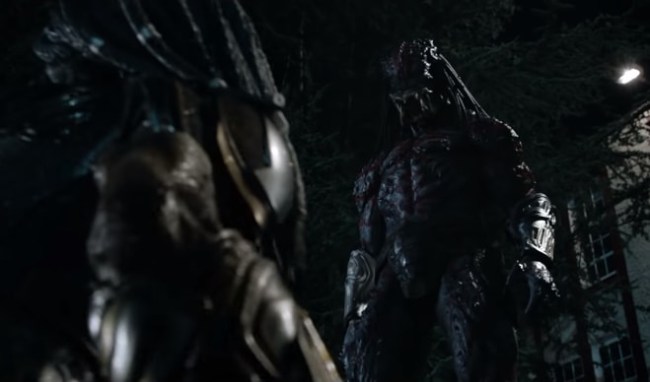 The original Predator movie was released back in 1987, and since then there have many sequels and crossovers in the franchise (some of which did not do the original sci-fi flick any justice). Based on the new longer trailer for the Predator reboot, it looks like the latest chapter might breathe new life into the classic movie.

Shane Black’s new Predator movie looks to go back to the franchise’s roots and has a bit of an 80s action movie feel. The Predator will hunt humans in a new environment — the suburbs. The ultimate hunter from another galaxy is back and more lethal than ever. The new trailer provides a little more about the plot than the first trailer. Here is the official synopsis:

From the outer reaches of space to the small-town streets of suburbia, the hunt comes home in Shane Black’s explosive reinvention of the Predator series. Now, the universe’s most lethal hunters are stronger, smarter and deadlier than ever before, having genetically upgraded themselves with DNA from other species. When a young boy accidentally triggers their return to Earth, only a ragtag crew of ex-soldiers and a disgruntled science teacher can prevent the end of the human race.

“Well, I think that there’s a basic premise that has to be honored every time you make a Predator film and that’s in some way, whatever the plot turns out to be, it has to, at some level, represent a hunt. But, beyond that, I think there’s infinite variability,” Black told Collider last month. “It’s like monkey bars. You ever play on the jungle gym when you were a kid? It looks like they’re rigid and hard and it’d be hard to play on these things because they’re so rough, but if you go inside them there’s actually a lot of room to move around, you just know that the borders are there every once in a while.”