Perfect Casting: Nick Offerman To Play The Team’s Manager In The ‘A League of Their Own’ Series 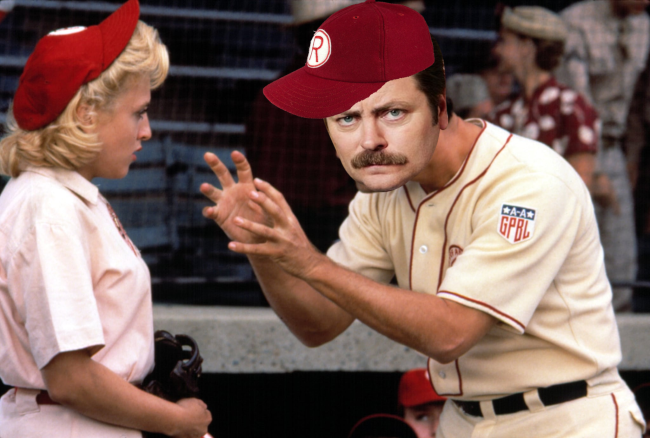 Man, talk about an absolutely ingenious piece of casting: according to reports, the one and only Nick Offerman will be starring in Amazon’s upcoming A League of their Own series as the manager of the Rockford Peaches, a role first made famous by Tom Hanks in the 1992 film of the same now.

Now, to be clear, Offerman will not be playing Jimmy Dugan — Hanks’ character that was based on former AAGPBL Fort Wayne Daisies coach and MLB Hall of Famer Jimmie Foxx — but will be playing this series’ equivalent: Casey “Dove” Porter. Given the increasing political correctness of our society, it should perhaps come as no surprise that the series isn’t choosing to directly duplicate Hanks’ admittedly gruff Jimmy Dugan.

Casey “Dove” Porter” is described as a former Cubs pitcher who is brought in to coach the Rockford Peaches. The character is most famous because his forkball killed a dove in mid-air in the middle of a game. Inspiring and charismatic, Dove was thought to be the next big Major League Baseball star, but blew his arm out after three years. Now he’s looking to make his comeback by making the Peaches into champions. [via The Hollywood Reporter]

A League of Their Own, which stars Abbi Jacobson (Broad City), Chanté Adams (The Photograph) and D’Arcy Carden (The Good Place), is currently in production in Pittsburgh. In addition to Jacobson, Adams, Carden, and Offerman, Gbemisola Ikumelo, Kelly McCormack, Roberta Colindrez, Priscilla Delgado, Molly Ephraim, Kate Berlant, and Melanie Field will appear. At this time, the series has no set release date. With the series currently in production, a Summer of 2022 release date seems most likely.