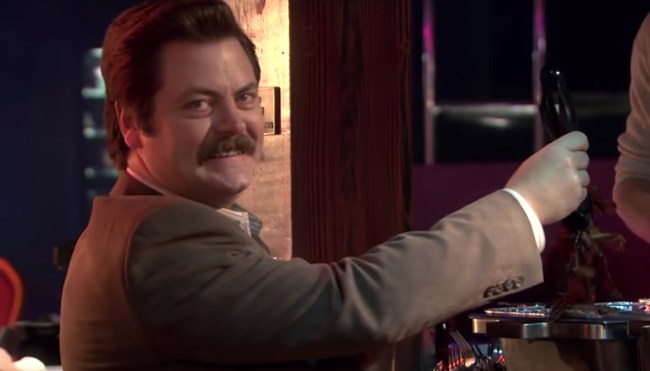 Nick Offerman spent more than a decade navigating a career defined by bit parts and nameless roles while trying to break into the entertainment industry, but that all changed when he was cast as the one and only Ron Swanson on Parks and Recreation.

Parks and Rec boasted a stellar cast and was filled to the brim with colorful characters, but it’s hard to argue Offerman’s portrayal of the infinitely quotable mustachioed manly man wasn’t one of the biggest factors in the show’s success—hell, the actor embraced the role of the self-hating bureaucrat and archetypical libertarian to a point where some people genuinely believe he is Ron Swanson (although he’s also played a role in blurring the line by operating his own woodshop in real life).

Offerman obviously had his life changed in plenty of ways when he found himself thrust into the spotlight virtually overnight, and during a recent appearance on The Dan Le Batard Show, he shared one of the best perks that came with his newfound celebrity status: a laughable amount of free bacon.

“I couldn’t go to a restaurant without people putting an extra inch of bacon on whatever I ordered.” – @Nick_Offerman on the treatment he received in real life because of his character “Ron Swanson”. pic.twitter.com/IZjlvYgWKx

“I couldn’t go to a restaurant without people putting an extra inch of bacon on whatever I ordered. It’s incredible, and I spent about a year just relishing in it and going to restaurants more often than I had for that very reason.

But then eventually, my cardiologist said, ‘Here, I want to show you a picture of this occluded sewage system. This is your arteries.’ And I said, ‘Oh, right. Got it. I live in reality.’

The thing is, no one would ever say anything. Something about the Ron Swanson character, it excites some sort of terror or respect in the public. It’s wonderful. Everyone’s really polite to me. So I would order a cheeseburger or a steak and it would just show up with a pile of bacon on it. I would look around, and usually, I could see a chef through the kitchen window just giving me a thumbs up.”

What a rough life.