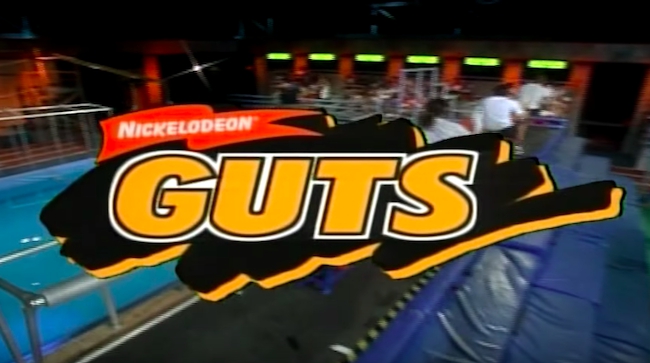 There are plenty of factors that helped turn me into the person I am today, and while my parents and teachers deserve a fair amount of credit, I’d also like to give a special shoutout to Nickelodeon for being there for me during my formative years.

Nick basically helped raise an entire generation of kids who hoped they’d one day be able to grab a shopping cart and go H.A.M. in a Toys“R”Us.

However, the Toy Run was far from the only thing on the network capable of inspiring an insane amount of jealousy.

If you grew up in the 90s, there’s a very good chance that one of your lifelong goals was to make it onto one of the many game shows on Nick in the hopes of bringing home a Super Soaker or a Sega Genesis— assuming you could figure out how to put together the Silver Monkey on Legends of the Hidden Temple.

However, there was one show in particular that I wanted to compete on more than any other: GUTS.

GUTS gave contestants plenty of chances to take home some 90s relics but it had a grand prize that overshadowed every other competition in existence: a piece of the legendary Aggro Crag.

I’m assuming everyone reading this never got a chance to hang with Mike O’Malley and Mo, but thanks to Chicago’s Marz Brewing, you now have the chance to get a taste of what it might have been like in the form of a GUTS-inspired beer.

On Tuesday, the brewery announced the release of Cryo Crag, a hazy New England-style IPA with a dope label design that’ll bring you straight back to the 90s.

You can now pre-order Cryo Crag. See link in profile. 🏔🗻🗻🗻⛰🗻The crystalline mountain Cryo Crag beckons. Its apex is shrouded above the Cloudy Boyz. Climbers leaving the base camp of Hazyvale and attempting to reach its summit have reported spontaneous avalanches of cryo powder, frequent cascades of lupulin crystals, and pungent mists of Simcoe. Many have attempted the climb and few have succeeded. Despite the aid of haze sherpas, years of training their palates, and conditioning in the low oxygen environment of the Cloudy Boyz. So, are you brazen enough to go vertical on this jagged mountain of flavor and take home your very own piece of the Cryo Crag. Do-do-do-do you have it? 🧗🏽‍♀️🧗🏻‍♂️🧗🏽‍♀️☁️☁️🗻🗻🏔🌁🏔🗻🗻☁️☁️#Nickelodeon #homagetoGuts #cryocrag #crystallupalin #cryopowder #craftcloudyboyz #hazyvale #juice #hazyIPA #chicagobeer ⛰⛰🏔⛰⛰ labels designed by @some_all_none 🗻🗻🗻🗻🗻🗻🏔preorder link in profile !!! 🏔🏔⛰🧗🏽‍♀️⛰🏕🧗🏽‍♀️⚡️love to @marzbrewer for this homage.

Marz also teamed up with a crystal company to give buyers the chance to take home their own mini version of the Aggro Crag.

The beer is only available at the brewery’s Bridgeport location but if you’re in the Chicago area and want to get your hands on some you can place a preorder now.