This So Needs To Happen: Nicolas Cage Says Playing The Joker Would Be ‘Perfect’ For Him 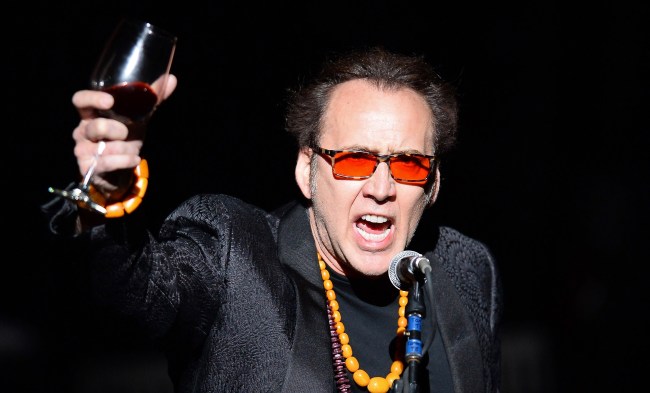 National treasure Nicolas Cage was asked in a recent interview if there are any comic book roles he’d be fired up to play or any characters that piqued his interest. Of course, he said that there were, because he’s Nicolas freaking Cage, and of course, one of the comic book characters he’d like to play is legendary supervillain The Joker. This needs to happen.

After all, Nicolas Cage is the man who is so into Superman that he named his son Kal-El and at one amazing point in time was signed up to play him in Tim Burton’s Superman Lives.

How this film never got made is one of Hollywood’s biggest failures.

Cage does get to finally at least be the voice of The Man of Steel in upcoming animated film Teen Titans GO! To The Movies, but surely there are still other comic book-based movie roles he’d like to conquer, right? Right.

Speaking with JoBlo about his new film The Humanity Bureau, Cage shared his, as always, tremendous thoughts on the topic.

Are there any comic book roles out there now that you’re itching to play or any characters that you’re super into that you’d be interested in?

I mean, I think my comic book days are kind of…I’m on to other things, but I always thought I’d make a great Joker and I always thought that I would’ve been a good villain in one of the Marvel [movies] like Doctor Doom. But, Doctor Doom you have to wear that mask, but I thought the story leading up to Doctor Doom could’ve been interesting. At this point if I was to go back into the format it would probably have to be as a villain.

Man, now that you’ve said “Nicolas Cage Joker” I’m not gonna be able to get that out of my head. That needs to happen somehow…

It would be the perfect one for me to go even more off the rails than I’ve ever done before and, y’know, it’d be fun.

Go even MORE off the rails? Oh man, like I said, this really needs to happen.

Check out the rest of the interview here where Cage also discusses his new film, some stories from The Rock, as well as his thoughts on what H.I. from Raising Arizona would be doing today.