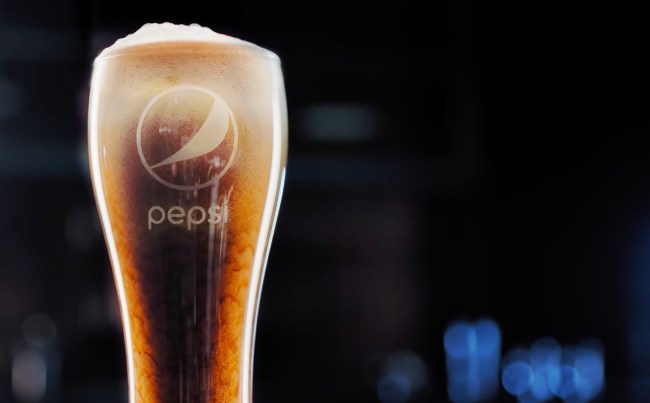 I’m going to go ahead and assume you’re not intimately familiar with Joseph Priestley, an 18th-century English scientist and the answer to a $2000 Jeopardy! clue concerning the man who discovered oxygen.

He might not be a household name (unless you grew up in a house full of nerds) but Priestley made an indelible impact on the planet around 250 years ago when he took a long, hard look at good ol’ fashioned water and thought to himself, “How can I make this less… boring?”

After a bit of experimentation, the Englishman turned the hydration game on its head in 1767 when he engineered a way to infuse H2O with CO2 and ushered in a new era of liquid consumption by introducing carbonated water to the masses.

It was only a matter of time until people fell head over heels for his concoction, launching into a fierce love affair with bubbling libations that rivaled the fling between Baby and Patrick Swayze in Dirty Dancing.

In the following centuries, countless innovators would tinker with Priestley’s creation, standing on the shoulders of the beverage behemoth to birth soft drinks of virtually every flavor and color imaginable into the world in an attempt to quench the public’s undying thirst for fizzy goodness.

Over time, the soda industry has experimented more than a guy at his first Burning Man to keep the public sated. Secret recipes have been tweaked (and untweaked), calories have been banished to an unknown dimension, and companies have rebranded themselves like a college freshman looking for a fresh start.

However, there’s one thing no one has had the gall to tamper with— at least until now.

The formula for making soda is pretty straightforward, and while you can ultimately add as many variables as you please, you’re not going to get very far without the constant that’s been relied on since the drink’s inception: carbon dioxide.

Soda without CO2 is like Bloodsport without Jean Claude Van Damme— the gas has been giving carbonated beverages their signature kick for over 250 years.

It might have taken a while, but a new challenger has emerged that makes Chong Li look like child’s play.

If you’ve frequented coffee shops or craft beer bars over the past few years, you’ve probably heard the word “Nitro” thrown around more than an episode of American Gladiator.

The concept of nitrogen-infused drinks is nothing new— one of Ireland’s most famous exports has been harnessing the power of the gas for close to a century. However, it was only recently that people decided to take a page out of the Guinness playbook.

Nowadays, nitrogen has made its way into lattes and IPAs and has seen a major spike in popularity among people who use the word “mouthfeel” too much. With that said, this trend—much like The Carpenters— has only just begun.

Last week, Pepsi invited me to take a first look at a secret project they had in the works.

I was kind of hoping the experience would involve getting driven around aimlessly while blindfolded after being shoved into the back of an SUV, but much to my dismay, I was informed there was no need for that much discretion.

After what could have been an eventful trip, I arrived at the address they provided and was ushered into a room, where I learned I had somehow earned the privilege of being the first person to ever taste Nitro Pepsi.

At this point, I should probably tell you what I told the people in the room: I’m not a huge soda guy. Seltzer is my thirst quencher of choice, and if I’m consuming a carbonated drink with calories, there’s a pretty good chance it’s an adult beverage.

Thankfully, this didn’t appear to disqualify me.

An iceless glass suddenly materialized in front of me and I watched the bubbles cascade toward the top like I have so many times before while waiting longer than I’d like to for my beer at an Irish pub. 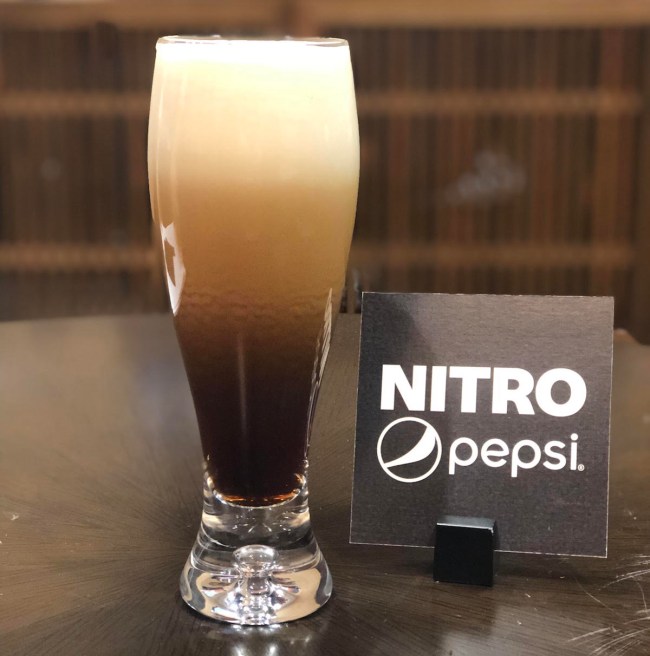 It eventually settled and left behind a sizeable, frothy head, which I can’t say I’ve ever seen on a soda before. 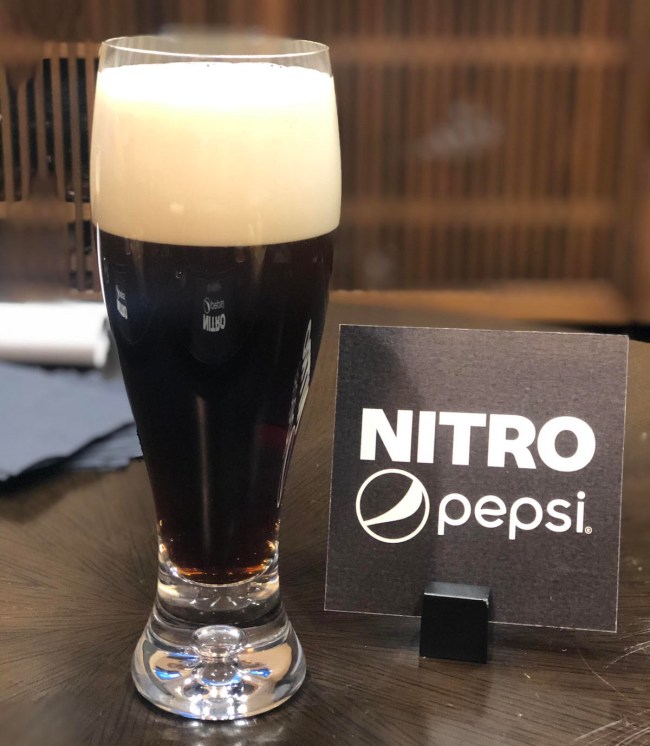 I was invited to take the inaugural sip and eagerly picked up the glass to claim the bragging rights.

I took my first taste, preparing myself for a cloying sweetness that never came. The texture —sorry: “mouthfeel”— caught me off guard; the cola was silky and effervescent, with the tiny spheres of nitrogen tickling my palate in a pleasantly subtle way.

I wiped away the foam that had latched onto my nose and mustache as my brain tried to process the disconnect between my eyes and my tastebuds— this was technically soda, but it wasn’t like any soda I’d ever had before.

Would I be a soda guy if this is what soda was? I hadn’t come here expecting to be greeted by a philosophical conundrum. Yet here I was.

The vessel was eventually swapped out for a new one filled to the brim with what I was told was a vanilla variation. It was just as smooth and a tad bit sweeter than the first but the vanilla flavor was nowhere close to as overwhelming as similar drinks I’ve tried before— including a couple of stouts I couldn’t even force myself to finish.

In a different time and place, I would have grabbed a torched and demanded Pepsi be put on trial for witchcraft based on how perplexed Nitro had made me. I was brought here under the guise I’d be drinking soda but was greeted with something else entirely: a fleeting glimpse into the future.

Eat your heart out, Marty McFly.

At the end of my visit, I was told Pepsi is still toying with the Nitro recipe so it’s currently unclear when you’ll have the chance to experience the agreeable confusion that I did for yourself.

With that said, if you do get the opportunity to try it out, I offer you two words of advice: carpe Nitro.