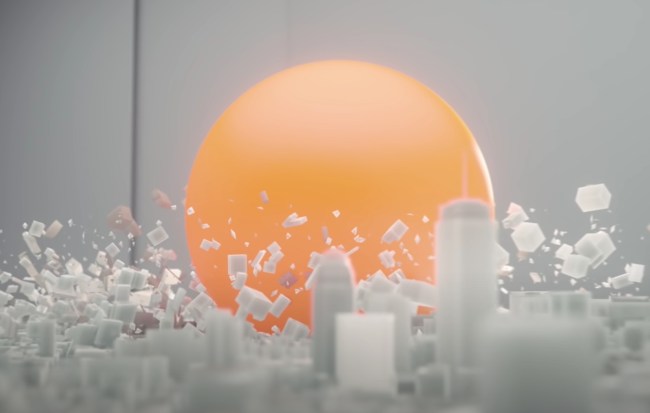 Life has been too good to be true lately, hasn’t it? Everything in the world has just been running so smoothly in 2020 that it’s hard to imagine waking up int eh morning to news of something catastrophic happening. I truly cannot fathom opening Twitter to bad news at this point because everything’s been so f’n peachy!

But let’s suspend reality for a moment and go through a thought experiment of what life would be like if something awful happened that completely changed life as we know it. I know that’s a difficult task given how we’ve all be running on auto-pilot for the past few decades and our day-to-day lives are perfect but you’ll have to indulge me on this.

YouTuber Neil Halloran put together this sobering simulation of what it would look like if a nuclear blast hit a major city. This step-by-step look at everything from the initial explosion vaporizing all organic matter within a certain blast radius to how clothes would get so hot they’d literally burn people like flames a distance away (within 11 kilometers).

If we could just entirely avoid this from ever happening that would be awesome:

Using estimates, he’s able to determine that 98% of all people within 2km would be dead and 50% of people located 2 to 11 kilometers would die. That’s 620,000 people dead within days of the blast, 120,000 of those were instantly vaporized.

If this were to occur on a particularly windy day then it’s time to kiss it all goodbye. So much of the fallout depends on how far the radiation particles are able to travel. He estimates that deaths from the
radiation fallout would be somewhere between 100,000 on up to all of the other deaths combined.

Now if you’ll excuse me, I’ll be Googling maps to the nearest fallout shelters in my area and printing up those maps and laminating them so I can put them in every room of my house. 2020 appears to be running on Murphy’s Law at this point with the mantra of “things will go wrong in any given situation, if you give them a chance,” aka ‘anything that can go wrong, will go wrong’.