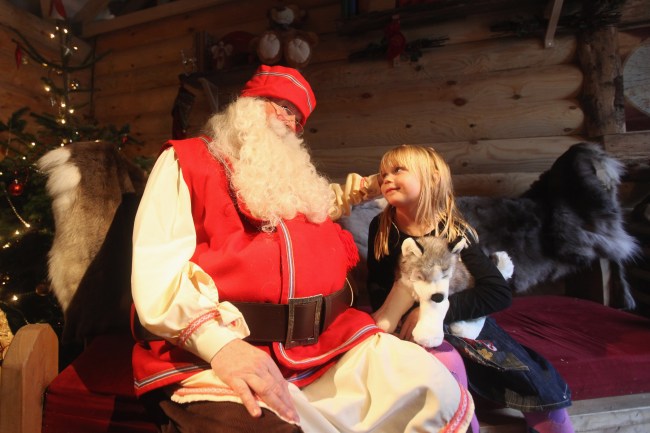 I distinctly remember the day I discovered that Santa was not real. I was in third grade, and we were mere weeks away from Christmas. My school lumped all the first and second graders together in a building, and the third-fifth graders were in another building. You had to keep them separate because the fifth graders were so horned up from their roiling hormones that the sight of a meek, tender first grader would set them foaming at the mouth and bulging in their kappa soccer shorts. These roided-up fifth graders were known to tear the little ones to fucking shreds whenever the ages mixed. Imagine a prison zoo where the meerkats are let out for exercise, and one of them doesn’t hear the whistle to head inside with the group, and then the fucking pythons come out of solitary to blow off some steam. Bones and eyeballs everywhere.

As a third grader, I had learned to keep my head down to avoid the sack taps, binder spikes, and tea bags that befell my outspoken classmates. One minute you’re sitting cross-legged (formerly “Indian style”) at the scholastic book fair, bending the holographic cover of the latest Animorphs; the next minute you feel the sticky base fur of J.C. Hathelwaite’s recently-dropped sack on your forehead, followed by raucous laughter from his sycophantic pervert pals. And I used to enjoy reading.

You learned to stay out of trouble: eyes down, keep moving, travel in packs, and buy the protection of a teacher. I used to bring Mrs. Sandborn chocolate milks with money I’d earned shoveling snow in exchange for her connections. She was the only one who could acquire things like scented Crayola markers, fuzzy animal stickers, and glue guns. She was warm, too, but she knew the unwritten rules and colored within the lines. In another life, we might have been something.

Such an environment demanded that you grow up fast. If first and second grade were the hot food and comfy bunks of basic training, third grade was the jungle warfare of Vietnam. Even so, I had clung to a few childhood beliefs. With only two weeks until Christmas break, I was a card-carrying member of Santatheism. I wrote my Christmas list in the neatest hand I could muster, affixed a holiday stamp, and sent the card off to the North Pole for consideration. I was conscious of my behavior; I took great pains in mounting a last-minute PR campaign of good deeds to urge Santa to reevaluate my candidacy. For earlier that year, I had upkicked a bottle of Nantucket Nectar out of Glennie Hall’s hand when she said “isn’t Francis a girls’ name?” The juice splashed all over her face, condemning me to the coal standard off which I’d tried, and tried, to move myself. But if I knew Santa as well as I thought I did, he would forgive me.

Those were the stakes when I found myself playing King of the Hill in the snow during recess one morning. The day was bitingly cold, the conditions harsh as my gasping exhalations dampened the inside of my neck warmer. The game was simple: whoever stands atop the big snow drift is the king. Knock him off and you take his place. At the moment, Robbie Wells was an unflinching despot, subduing wave after wave of would-be rulers. He was the only one of us who seemed to understand momentum and the advantages of holding the high ground. I had attacked the hill a few times only to be hurled off the back side by a coat sleeve. I was probably close to tears as I gathered myself for one final charge. Robbie, cunt that he was, saw me coming, tripped me, and proceeded to exfoliate my face with handfuls of icy brown snow. When he finally let me up for air, I wheezed through tears, “Santa is gonna skip your house for that!” Robbie laughed an evil laugh and said, “You still believe in Santa?!”

The game stopped. Everyone looked at me, my face raw, my lips trembling “Why— Why wouldn’t I?”

“Because he’s not real. It’s just your parents. They give you those presents.”

“Think about it.” He was calm now, diplomatic even. “Santa comes to every single kid in the world, in one night? That’s impossible.”

The pieces startled to tumble into place. Logically, it didn’t make much sense. My belief system was built on a fragile willingness to overlook equations of distance and time. I’d flown on planes from Maine to Florida, and those trips had taken hours. How could Santa get from Japan to my house, and all the houses in my neighborhood, and all the houses in the entire fucking world… in 12 hours?

We always left a plate of cookies for the big man and his reindeer. He always responded with a thank-you note, and the handwriting looked eerily similar to moms.

And finally, I’d looked up our chimney. From every picture I’d seen of Santa, he was simply too fat to get down that thing. I believed in magic, but I also knew how hard it was for fat people to lose weight. It all seemed like too much.

Later, when my mom picked me up from the bus stop, I asked her. She tried to wave it off as playground bullshit, but I kept probing for answers she didn’t have. Finally, she came clean, and Santa was no more.

A couple years ago, Robbie Wells posted on Facebook that he’d received his two-months-sober chip. He thanked his family, his friends, and God. The post garnered over a hundred likes.

I flagged it as spam.