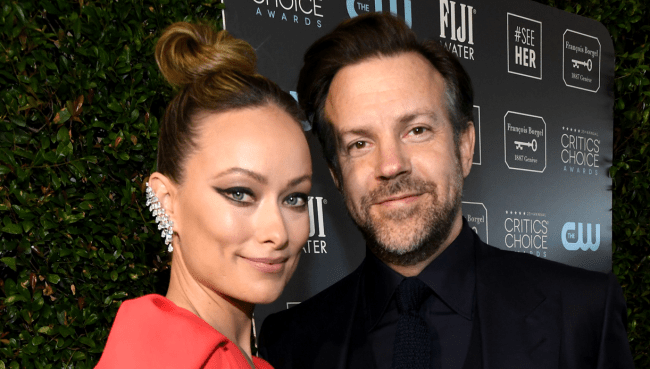 In what has to be the weirdest celebrity couple story this side of Johnny Depp accusing Amber Heard of dropping a deuce in his bed, Olivia Wilde is now trolling the internet about her “special” salad dressing.

On Tuesday, the Daily Mail published an interview with Olivia Wilde and Jason Sudeikis’ former nanny in which she spilled the beans with a sordid selection of stories about the couple.

Among those stories was the bizarre tale about how the Ted Lasso star allegedly threw himself in front of Olivia Wilde’s car in an effort to try to stop her from going to see her new boyfriend Harry Styles.

The kicker to the tale was the fact that, according to the nanny, Sudeikis was especially distraught because Wilde was taking Styles a salad she had prepared with her “special dressing.”

Wilde infuriated Sudeikis by preparing a salad for Styles with her ‘special dressing’ in the family kitchen – leaving him ranting furiously at her and filming the encounter, before he tried to prevent her leaving by lying under the car.

The nanny explained: ‘The night she left with her salad, Jason had chased after her, videotaping her in the house.

‘She went back into the house and he went in, it was back and forth. He said he was doing it on purpose to make her late going to see Harry.’

Naturally, because the internet’s gonna internet, amateur detectives immediately went to work to try and figure out what was so special about this salad dressing.

What they came up with was a recipe Wilde gave to the Food Network awhile back.

Turns out, it really isn’t all that special: red wine vinegar, Dijon mustard, honey, kosher salt, a clove of garlic, and olive oil.

Wednesday night, Wilde, who is obviously following along with the rest of the world, posted a photo of a page from Nora Ephron’s book “Heartburn” which, you guessed it, features the recipe for some salad dressing.

“Mix 2 tablespoons Grey Poupon with 2 tablespoons good red wine vinegar,” the book reads. “Then, whisk constantly with a fork, slowly add 6 tablespoons olive oil, until the vinaigrette is thick and creamy; this makes a very strong vinaigrette that’s perfect for salad greens like arugula and watercress and endive.”

“Yes @oliviawilde posting the salad dressing recipe is everything!” one person tweeted.

Olivia Wilde releasing the recipe for the salad dressing is one of the funniest things to happen in 2022 https://t.co/iVwy83m7g0

Sudeikis and Wilde have gone on record claiming the former nanny is lying, for obvious reasons.