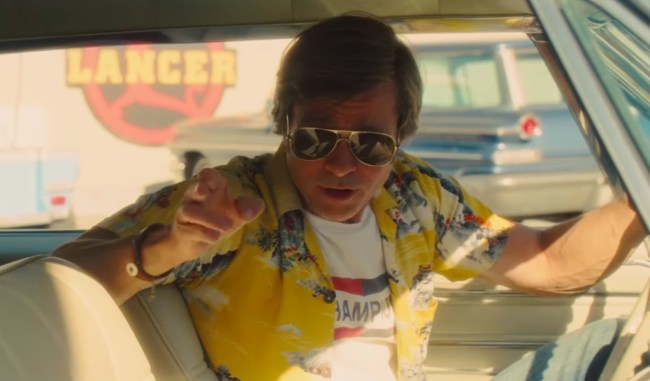 I think most people would say Pulp Fiction is Quentin Tarantino’s magnum opus but I’ll always have a special place in my heart for Inglourious Basterds thanks in no small part to the efforts of Brad Pitt, who may have been overshadowed by Christoph Waltz but still delivered an incredibly memorable performance thanks to scenes like this one.

As a result, I was thrilled when I heard the actor was teaming back up with Quentin Tarantino and joining forces with Leonardo DiCaprio for Once Upon a Time in Hollywood, a retro period piece set in, well, Hollywood at the tail-end of the 1960s.

Those names were more than enough to sell me on the movie so I was naturally thrilled when Margot Robie announced she was joining the cast alongside the likes of Al Pacino, Kurt Russell, and a seemingly endless list of notable actors who signed on for Tarantino’s ninth directorial effort.

We’ve been treated to a slow and steady trickle of details since the project was announced a couple of years ago but didn’t get our first real look at it until a couple of months ago when the first star-studded trailer dropped.

We’re about two months away from the film’s official debut on July 26th, and while some lucky viewers will get the chance to get in on the ground floor when it screens at Cannes today, the rest of us will have to settle for a new trailer that gives us the closest look at the movie we’ve gotten so far.