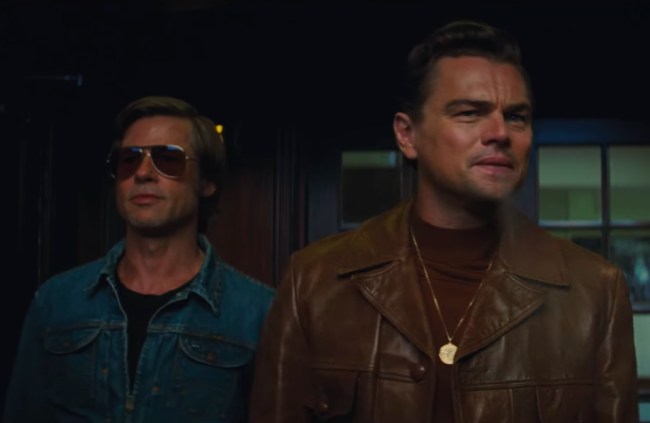 In 1969, Hollywood was rocked to its core when actress Sharon Tate and four other people were killed in cold blood by members of the Charles Manson “family.” Manson’s followers carried out what were dubbed the “Helter Skelter” murders in an attempt to trigger an apocalyptic war which, as we all know, didn’t exactly pan out as planned.

In July of 2017, it was revealed Quentin Tarantino had decided to tackle the murders in a way only Quentin Tarantino can with Once Upon a Time In Hollywood, and since then, we’ve been treated to a steady stream of information that suggests the director’s ninth film could be his magnum opus when everything is said and done.

Last year, we learned Brad Pitt would be joining Leonardo DiCaprio and Margot Robbie in the film.  and as if that wasn’t enough, Tarantino also decided to cast James Marsden and Al Pacino for good measure (Burt Reynolds, Kurt Russell, and Timothy Olyphant will also be making an appearance).

On Monday, DiCaprio shared the first poster for the film, which was subjected to a fair amount of ridicule for looking like something that would be whipped up by a high schooler taking an introductory course in graphic design.

Thankfully, we’ve found an antidote for that mess in the form of the first trailer for Once Upon a Time In Hollywood, and based on the teaser, we’re in for quite a treat.