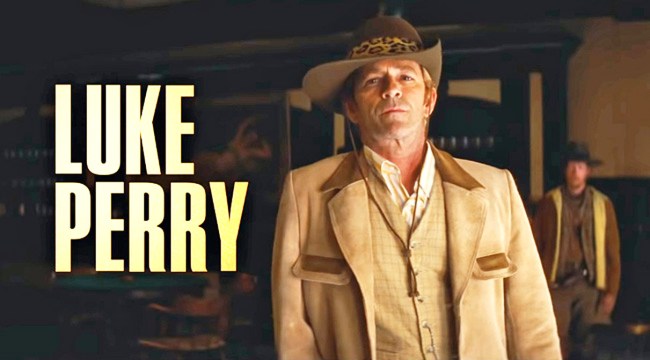 There were several interesting moments during this year’s Academy Awards. You had Martin Scorsese and other celebrities’ shocked reactions to Eminmen’s performance. There was also Billie Eilish’s disgusted reaction to Maya Rudolph and Kristen Wiig singing. And then there was the annual Oscars “In Memoriam” segment which made many viewers unreasonably angry that actors Luke Perry, Cameron Boyce, Tim Conway, Sid Haig and Orson Bean were not mentioned.

The late actor that seemed to spark the most emotion in viewers for being left out of the “In Memoriam” segment was Dylan McKay hisdamnself, Luke Perry.

Perry, who appeared in over 30 films and several hundred episodes on TV including shows like Beverly Hills, 90210, Oz, Jeremiah, and Riverdale, was an especially odd omission considering the fact that he actually had a role in one of this year’s Best Picture nominees, Once Upon a Time in Hollywood.

Well, it took a few days, but the Oscars finally addressed the snubs of Perry and company with a statement, according to The Hollywood Reporter.

“The Academy receives hundreds of requests to include loved ones and industry colleagues in the Oscars In Memoriam segment. An executive committee representing every branch considers the list and makes selections for the telecast based on limited available time. All the submissions are included on Oscar.com and will remain on the site throughout the year. Luke Perry and Cameron Boyce are remembered in the Oscar.com gallery.”

Everyone happy now that Perry’s omission has been explained by the Academy? No? That’s what I figured.

Remember how the Oscars left Luke Perry out of the In Memoriam segment even though he was literally IN ONE OF THE BEST PICTURE NOMINATED MOVIES pic.twitter.com/EJt7PgnheN

So the Oscars made a lame and pathetic excuse on why they didn't mention Luke Perry in the memorium section. I won't be watching ever again, they should miss no actor who dies and no excuse if they do. Here, Luke with the rest of the cast in 90210, we will always remember you. pic.twitter.com/OYrEhjGng3

Especially as he was actually in one of the big film nominees of the night (Once Upon A Time in Hollywood)……!!

Tori Spelling goes off on the Academy for leaving co-star Luke Perry out of #Oscars In Memoriam https://t.co/hWJApcX4Vs pic.twitter.com/GlmEtTKXGU

So they were just being knobs then is what I'm getting? They didn't forget them they just intentionally didn't include them