Dear Scientists Who Say We’re Overbonding With Our Dogs: Shut Your Mouth 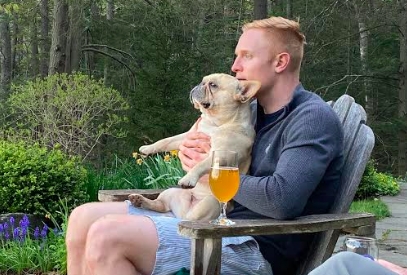 Dogs are becoming “overly bonded” as we continue to work from home. Here’s why that's a problem https://t.co/FK6RXGmNoo

Boy, scientists are having a moment. Really feeling themselves these days. For years, whenever scientists would squeak up about the melting ice caps or the dangers of Four Loko, we said “shut up, nerd” and went back to beach volleyball. Then Coronavirus happened, and everyone started asking for the scientists’ opinions, and now they’re riding down main street, standing out of their Chevy Volt sun roofs, yelling through bullhorns about gravity and penicillin. God will have the last laugh though, and those of us who stay true to His word will be laughing with him.

The latest science news is the best evidence yet that these dickheads have jumped the shark. Apparently, we need to be less nice to our dogs because they’re becoming “overly bonded.” It sounds like the sort of nonsense you hear from fuccbois who jerk you around but keep you at arm’s length so you don’t become too attached. “Don’t let your girlfriend become overly bonded to you or she’ll lose the ability to self-soothe.” Alright Christian, take a breath.

Bloomberg– Dogs are becoming “overly bonded,” which means they’re intensely reliant on our presence to stay calm. Dogs signal this when they can no longer self-soothe and panic after an owner leaves a room or, God forbid, the house. It has to be addressed now—long before your dog is left home, solo, for long stretches when you return to the office—to avoid doggie meltdowns.

Andrea Arden, owner of Andrea Arden Dog Training in New York, is already seeing these tantrums happen in puppy playgroups. “The minute their person walks away, they’re pretty hysterical,” she says. “Rather than being a little bit stressed”—as in normal times—“they’re really, really concerned—vocalization, excessive panting, and an overall worried demeanor.”

Sounds terrible, Andrea. God forbid our dogs make noise, breath hard, and have an “overall worried demeanor.” Are you kidding me? Those are three of the five pillars of dog life. Throw sleeping and eating in there and you’ve got yourself a full day. An overall worried demeanor? That’s the big threat here? Dear Lord.

I’ll pause here to mention that I don’t know if scientists are actually the ones espousing this shit. I blamed them in the beginning because that seemed funnier to me, but now it’s sounding more like dog trainers than scientists. Whoops. Sorry scientists (but not really sorry).

Here’s the solution: never leave your dogs alone. If the world returns to normal some day, bring them with you to work. If you can’t, quit your job. Or tell them you don’t feel safe coming in to a workplace. There are dozens of articles forecasting a shift in the workplace towards work-from-home setups, even if companies can open their doors again. Don’t be the asshole who heads back in just to have access to that unlimited cold brew tap. Stay home, if not for humanity’s sake than at least to prevent your dog’s overall worried demeanor from setting in.