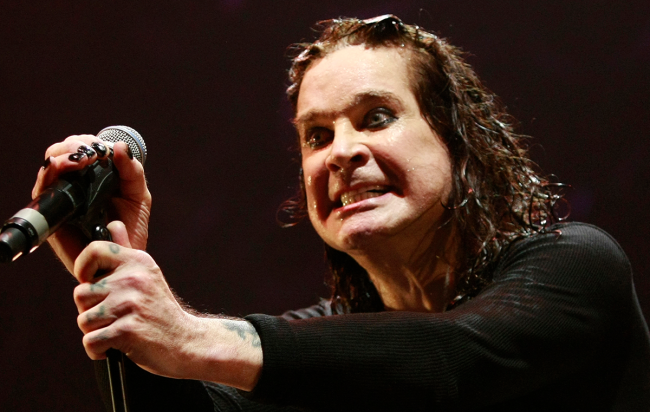 The annals of rock n’ roll debauchery run deep with tales of questionable deeds dating all the way back to the genre’s inception; trashed hotel rooms, crashed cars, and stories of insane partying are numerous, but there is perhaps no artist at the center of more tales that capture the spirit of the music that made them famous than  Ozzy Osbourne.

To truly appreciate the legend of Ozzy Osbourne, you have to go all the way back to the late 1960s, which is when one of the forefathers of heavy metal linked up with the other musicians who comprised Black Sabbath. From that point on, its most notable member seemingly made it his mission to create as much chaos as possible, which he did with the help of his trusty sidekicks: Alcohol and Illicit Substances.

Over the years, Ozzy’s antics—both onstage and off—have become the stuff of legend. Whether it was biting the heads off of animals, chucking raw meat at concertgoers, or snorting a line of ants as Mötley Crüe watched in a combination of horror and awe, he is the encapsulation of the “Insane Rock Star Who Can’t Be Tamed” archetype.

Given the almost endless number of wild exploits to pick from, it’s almost impossible to choose one that stands out above the rest. However, if I had to choose the most unusual bind of the many he found himself in over the course of his touring days, it would probably be the time he found himself in a bit of a jam after deciding to use a shrine to the dead as his personal urinal.

The year was 1982. Ronald Reagan was in office, the world was enthralled by Michael Jackson’s Thriller, and Time’s Man of the Year was “The Computer,” which is almost as big of a cop-out as the time they decided to give the honor to anyone who picked up a copy of the magazine at the end of 2006.

Ozzy, on the other hand, found himself touring in the wake of the release of Diary of a Madman, the second solo album he’d recorded since his unpredictable behavior got him kicked out of Black Sabbath (which replaced him with the equally iconic Ronnie James Dio) in 1979. He was doing just fine on his own, as he’d bounced back with Blizzard of Ozz (a record home to a little tune called “Crazy Train”) the following year and was hoping to keep the momentum going with his next project.

At the time, Osbourne’s manager was a woman named Sharon Arden, who would eventually take his last name when she married him later that year. Before becoming his wife, she was essentially a glorified babysitter who’d been instrumental in helping Ozzy and the rest of his camp navigate the controversies and PR nightmares they were so fond of getting themselves into (she also played a key role in surrounding him with a stellar supporting cast of musicians when he suddenly found himself without a band.)

On February 19, 1982, Ozzy and company were in San Antonio to play a show almost exactly one month after he scandalized the good people of Des Moines during the infamous Bat Incident that led to him getting a couple of rounds of rabies shots, which is probably the only thing that was actually capable of killing him.

Sharon had the incredibly unenviable task of trying to keep Ozzy from getting into even more trouble than he already was, which included making sure he made it onto the stage each night. Osbourne had a tendency to sort of just wander off, so she’d begun hiding all of his clothing under the assumption he’d come to her when he realized he didn’t have anything to wear.

Unfortunately, she didn’t take similar measures when it came to her wardrobe, because if she had, it’s safe to assume the singer never would’ve been found roaming around the streets of San Antonio in one of her dresses on the afternoon of the show.

I probably don’t have to mention the singer had helped himself to some booze before deciding to hit the town, as that can just sort of be assumed considering that was his natural state during the time. However, despite his super-human reputation (and a sprinkling of neanderthal DNA), Ozzy is still human with human needs and a human bladder that needs to be emptied every now and again.

If you’re familiar with the feeling of sheer desperation that comes with not being in the vicinity of the proper facilities when nature calls, you know the only thing that matters at the moment is finding a place to deposit the reservoir when the dam inevitably bursts. For Ozzy, that was what he thought was a statue but what was actually the Cenotaph, a large monument that was erected near The Alamo to pay tribute to the people who fought for Texas when General Santa Anna and his troops laid siege to the iconic mission in 1836.

If you think a guy in a dress peeing on a massive pillar in broad daylight would catch the attention of anyone in the area, you would be right, as Osbourne was arrested for public intoxication and spent a few hours in jail before bailing himself out for $40 and heading back to Hemisfair Arena Convention Center, where he performed the very same night.

Ozzy may not have intended to use the Cenotaph as a urinal, but the Prince of Darkness was already viewed as the Antichrist by a good chunk of people so it’s safe to say peeing on a memorial dedicated to those who defended The Alamo doesn’t do wonders when it comes to helping convince them otherwise.

The local government banned Osbourne from performing in San Antonio, which was eventually rescinded a decade later after he made a formal public apology and donated $10,000 to the Daughters of the Republic of Texas, the organization tasked with caring for The Alamo and the surrounding grounds (which presumably includes the monument that needed to get hosed down on that fateful afternoon.)

Since then, Ozzy has played a bunch of shows in San Antonio and even returned there with his son for an episode of Ozzy and Jack’s World Detour, where they met with a city councilman and visited the site of the incident.

Ozzy entered rehab for the first time two years after the mishap occurred, and while he didn’t manage to clean up his act entirely, he did appear to sort of learn his lesson, as that was the last time he desecrated a memorial. I’m glad it never happened again, but I’d be lying if I said I wish this had never happened, as I can’t think of a story that sums up his essence quite like this.