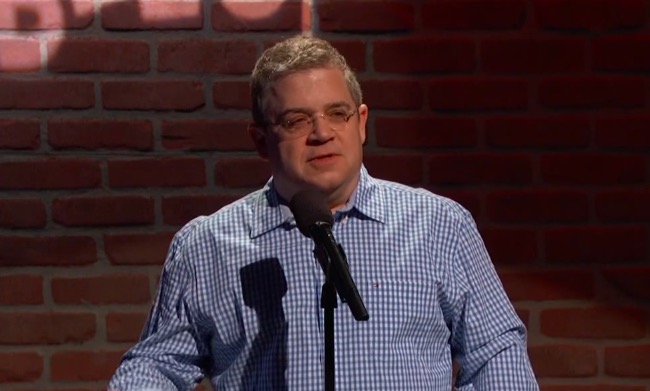 Patton can be considered a quasi-divisive comedian depending upon where you fall on the political spectrum but that shouldn’t preclude you from getting your LOL’s off on this clip from Jimmy Kimmel Live last night.

Comedian Patton Oswalt has a new stand-up special out on Netflix named Annihilation, and he was on Kimmel last night to flex his stand-up prowess a little. Only instead of telling his own jokes, Patton Oswalt went on Kimmel to read jokes from Mike Huckabee’s Twitter account. The idea here is that Mike Huckabee’s jokes are so fucking awful on Twitter that they must’ve been written for the real world, and in order for them to be funny they need to be spoken aloud by a stand-up comedian.

If you haven’t watched Patten Oswalt’s new stand-up special on Netflix yet you can check out Annihilation by following that link. It’s a stand-up special focused on life after the death of his wife, a post-Trump era, and what life is like on his new journey with a new wife. It has a 7.4/10 score on IMDB and a 100% score on the Rotten Tomatoes ‘Tomatometer’ but only a 66% audience score. You can make whatever you want of those ratings, I tend to trust IMDB over Rotten Tomatoes but it’s all a matter of personal preference.