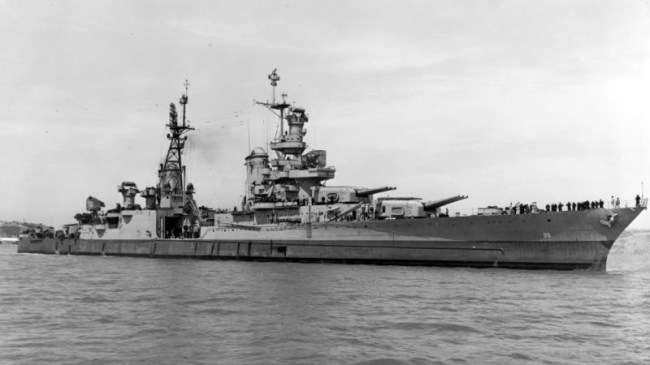 During World War II, the USS Indianapolis was torpedoed twice and sunk by an Imperial Japanese submarine in the early morning hours of July 30, 1945. The USS Indianapolis had just completed a secret mission delivering components of the atomic bomb used in Hiroshima, but in a mere 12 minutes the mighty warship sank into the Pacific Ocean. The American cruiser sank so fast that the crew was not able to transmit a distress signal. Of the 1,196-man crew, 880 died on that day or in the following days due to exposure, dehydration, drowning, and shark attacks. For the past 72 years the USS Indianapolis has been missing, but it was just found by Microsoft co-founder Paul G. Allen and a team of civilian researchers.

The team led by the entrepreneur and philanthropist announced that they had found the wreck of the WWII cruiser. The USS Indianapolis was discovered 18,000-feet in the Pacific Ocean. Utilizing estimates from Naval History and Heritage Command’s Dr. Richard Hulver, Allen and team were able to narrow the search perimeter to approximately 600 square miles. Then using state-of-the-art subsea equipment known as the R/V Petrel they surveying and mapping the massive area.

“The Petrel and its capabilities, the technology it has and the research we’ve done, are the culmination years of dedication and hard work,” Allen’s director of subsea operations Robert Kraft told the Navy. “We’ve assembled and integrated this technology, assets and unique capability into operating platform, which is now one amongst very few on the planet.”

We've located wreckage of USS Indianapolis in Philippine Sea at 5500m below the sea. '35' on hull 1st confirmation: https://t.co/V29TLj1Ba4 pic.twitter.com/y5S7AU6OEl

Only 316 members of the USS Indianapolis made it back home, and there are a mere 22 survivors still alive today. These brave survivors will surely be thankful to Allen and his team for finding their long lost ship where they lost so many friends and fellow sailors.

Coincidentally, the USS Indianapolis is the same ship from Quint’s epic story from “Jaws.”

“Japanese submarine slammed two torpedoes into her side, Chief. We was comin’ back from the island of Tinian to Leyte. We’d just delivered the bomb. The Hiroshima bomb. Eleven hundred men went into the water. Vessel went down in 12 minutes.

Didn’t see the first shark for about a half-hour. Tiger. 13-footer. You know how you know that in the water, Chief? You can tell by lookin’ from the dorsal to the tail. What we didn’t know, was that our bomb mission was so secret, no distress signal had been sent. They didn’t even list us overdue for a week. Very first light, Chief, sharks come cruisin’ by, so we formed ourselves into tight groups. It was sorta like you see in the calendars, you know the infantry squares in the old calendars like the Battle of Waterloo and the idea was the shark come to the nearest man, that man he starts poundin’ and hollerin’ and sometimes that shark he go away… but sometimes he wouldn’t go away.

Sometimes that shark looks right at ya. Right into your eyes. And the thing about a shark is he’s got lifeless eyes. Black eyes. Like a doll’s eyes. When he comes at ya, he doesn’t even seem to be livin’… ’til he bites ya, and those black eyes roll over white and then… ah then you hear that terrible high-pitched screamin’. The ocean turns red, and despite all your poundin’ and your hollerin’ those sharks come in and… they rip you to pieces.

You know by the end of that first dawn, lost a hundred men. I don’t know how many sharks there were, maybe a thousand. I do know how many men, they averaged six an hour. Thursday mornin’, Chief, I bumped into a friend of mine, Herbie Robinson from Cleveland. Baseball player. Boson’s mate. I thought he was asleep. I reached over to wake him up. He bobbed up, down in the water, he was like a kinda top. Upended. Well, he’d been bitten in half below the waist.

At noon on the fifth day, a Lockheed Ventura swung in low and he spotted us, a young pilot, lot younger than Mr. Hooper here, anyway he spotted us and a few hours later a big ol’ fat PBY come down and started to pick us up. You know that was the time I was most frightened. Waitin’ for my turn. I’ll never put on a lifejacket again. So, eleven hundred men went into the water. 316 men come out, the sharks took the rest, June the 29th, 1945.

Anyway, we delivered the bomb.”