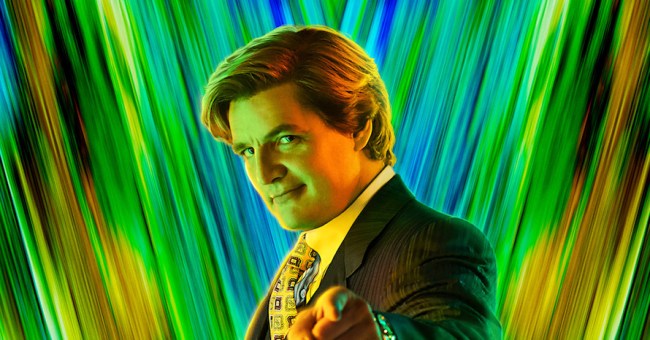 This guy look familiar to you? Well, he should, that’s Pedro Pascal, star of The Mandalorian and Game of Thrones and the second Kingsman and a ton of other shit. Ever since (spoiler warning) the Mountain crushed his tiny skull, dude’s been crushing it on both the big and small screens.

But does this character look familiar to you? The preposterous hair? The shticky power point? The smugness? The 80s-ness? If you guessed Donald Trump, congratulations, you’re perceptive enough to pick up on a blatantly obvious reference when it’s being beaten over your head. While I wasn’t alive back then, my Dad once told me that the 1980s  version of Donald Trump was like a goofy villain in a ripoff James Bond movie as he strolled around New York in his ill-fitting suits amassing $3.4 billion in debt and infamously pushing for the Central Park Five — who were innocent teenagers, by the way — to be given the death penalty.

“Pedro Pascal is a great actor, so I think it’s really good. And so, I can’t tell you too much about him, other than he’s a leading character and he has a lot of costume and there’s some reference,” she added, indicating a mood board filled with photos of Trump during the 80s. “Donald Trump, of course. Well, that’s helpful to look at Donald Trump, isn’t it?”

“So he has really beautiful tailoring done by lovely tailors, and beautiful fabrics, really elegant and expensive, but just something is not quite right. How’s that? They don’t quite fit and they’re not quite right. And I’m sure that people will think I don’t know anything about tailoring when they see it, but the truth is, that’s how we wanted them to be. There is something about the period of Donald Trump and being a businessman, isn’t there, of being rather sleazy a little bit, and a bit goofy hair and a lot of talk. So that’s why he’s there. Yeah, so that’s it, really,” she concluded. [via CBR]

Wonder Woman 1984, which was originally set to hit theaters all the way back on June 5, is now scheduled to hit theaters in the United States on October 2. Fingers crossed, too, but not only does the movie look legitimately awesome, but it arguably looks better than the original. It’s also yet to reveal what Kristen Wiig will look like as Cheetah, which could possibly come this weekend when a new trailer is dropped at DC FanDome.