Sensing Freedom, Huge Pet Python Goes Rogue, Bites Owner And Wraps Itself Around Her In A Flash 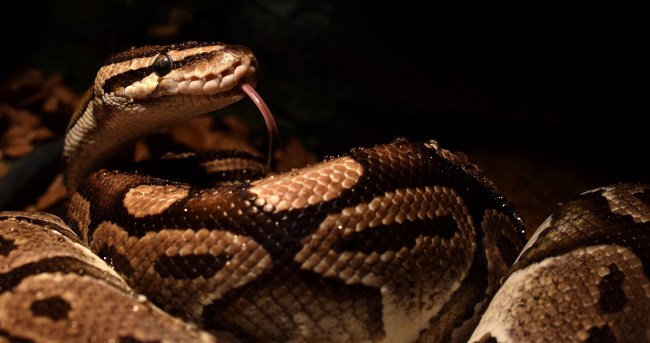 I think UFC fighter Donald Cerrone had it right. If you’re going to be anywhere near a python it should be in the form of a leather jacket.

We’re talking about an animal that thinks it is a good idea to get into fights with alligators, king cobras, leopards, porcupines, and swallows crocodiles whole.

So having one of these monsters as a pet? That doesn’t seem like a very wise life decision.

This is a lesson one woman learned the hard way recently.

In the video below, we see a woman trying to take a pet python out of its glass case. As she does so, the python spots its opening and sensing freedom forever from its stifling enclosure, locks its jaws on to her hand.

Sensing the victory is close at hand, and despite the woman’s relative calm, the python then really puts the pressure on, literally, by wrapping itself tightly around her arm.

It’s at that point that the woman begins to see the writing on the wall and decides that the situation she now finds herself in is going to require some assistance.

Feeling her nerves beginning to fray, the python then attempts to seal the deal by wrapping itself around one of her legs.

This sends both the woman as well as the man trying to help extracate her from the python’s grip into full blown panic mode.

Around that point the video cuts out, leaving us all to wonder who ended up with the ultimate win in this battle for supremacy. I know who I was rooting for.

Of course, the important part here is that the person doing the filming never wavered and we get to watch it all unfold in glorious vertical video form.