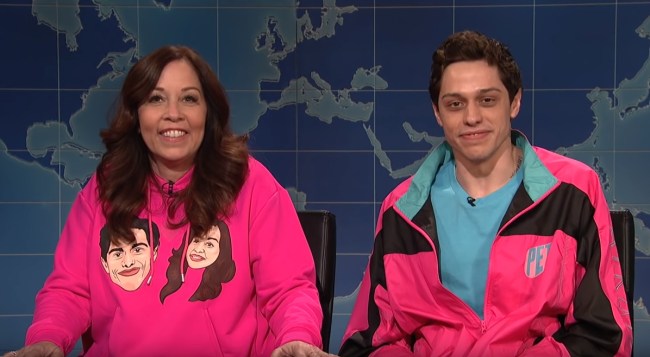 Has your mother or father struggled to find romance after a divorce, so like a good son or daughter you help them create a dating profile on Plenty of Fish or Tinder? That’s one way to help your parent discover love again.

Then there is the Pete Davidson approach to assisting his mom find an appropriate suitor — he goes on an international television show and tells everyone that they should have sex with his mother. I guess Pete doesn’t subscribe to the “you catch more flies with honey than vinegar” philosophy.

Davidson appeared on the new Netflix “social series” Dressing Funny where he propositioned men to have sex with his mom. Weird flex, but okay. The show’s host Tan France was completely taken aback by Davidson’s quest to get his mother laid. Tan, a “resident Queer Eye fashion guru,” attempted to help Pete find a better fashion sense, but all Pete wanted to find was some pipe for his mother.

Pete’s father, Scott Davidson, was a New York City firefighter who died trying to save lives during the 9/11 terror attacks at the World Trade Center. According to Pete, his mother has “been, like, not with anybody since, like, my dad died.”

Pete used his appearance on the Netflix show to tell the world that his mother is very available. Tan asked Pete: “Does your mom date?” Davidson, while chowing down on a burger, responded: “I’m trying to get her to.”

Pete’s relationship advice to his woman who brought him into this world is that he doesn’t care who dates his mom, Amy Waters Davidson, but she needs to get a hearty sex sesh. “I don’t care. Someone should slam her.”

Then the SNL star begged that “someone needs to get up in that and get that lady off my back!”

Pete Davidson talking about his Mom & how he potentially might have sex with her 🤣🤣🤣🤣 pic.twitter.com/0TIMSmVODY

Davidson went for the extra shock value by adding: “At this point, I might f*ck her.” Which would be easy to set up since they both live in the same house. Davidson bought a $1.3 million home in Staten Island a few months ago after Ariana Grande broke up with him, where he lives with his mom.

When asked what he would say if his mother brought a guy home who was a d*ck, Pete said: “Yeah, I’d be like, ‘Hey that guy’s not cool, but, like, get it in.’”

In May, Pete invited his mother to appear on Saturday Night Live for the Weekend Update segment and to thank her on Mother’s Day. No word on whether Pete made the same offer to Michael Che or Colin Jost to help his mom get laid.