Video Of A Plane Dropping 100,000 Trout Into Lakes Around Colorado Is A Trip 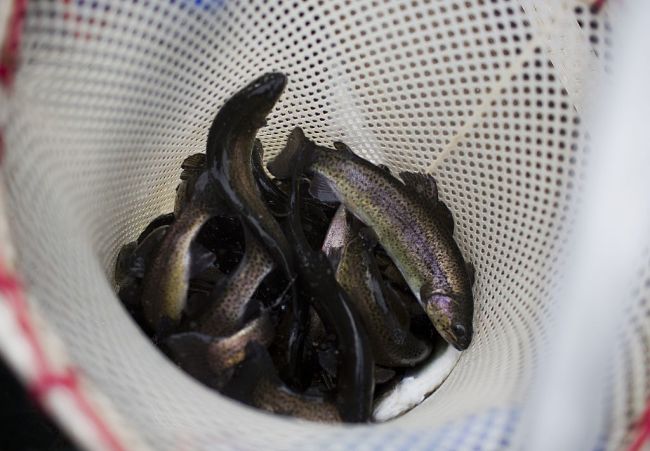 Fish have quite literally been flying around the state of Colorado recently. The Colorado Parks and Wildlife Program is conducting its aerial stocking program adding 275,000 fish to 240 high-country lakes around the state this summer. In other words, they’re dropping fish out of a plane.

In the bizarre yet extremely entertaining video, pilots dropped almost 100,000 trout into 73 lakes. The trout are one-inch-long cutthroats and they fell into the various lakes from a pretty high distance with the plane slowing down to around 90 mph.

What’s really interesting is that the fish are so small and light, that they appear to just float like a feather down to the water.

“We’re about 100 feet above the lake and as [the fish get dumped], they almost stop immediately as they come out of the airplane,” Larry Gepfert, one of three CPW pilots, told Colorado Outdoors. “They have very little mass to them so they just kind of float down into the water.”

According to Field and Stream, studies show that survival rates are better than 90 percent for fish stocked using this method. Aerial stocking is also far more efficient than loading fish into milk cans and packing them on horseback to remote, high-elevation lakes.

Yes, dumping fish out of a fast-moving plane does sound much more efficient than loading fish into milk cans and carrying them around to lakes via horseback. Good call for whoever came up with the idea of restocking lakes by dropping fish from the bottom of an aircraft.

As for why exactly they’re doing this, a majority of the high-mountain likes don’t have a proper habitat that allows for natural reproduction.

Related: ‘Meth-Addicted Fish’ Could Be The World’s Newest Environmental Issue