Portland Protester Explains Why She Faced Down Police While Completely Naked 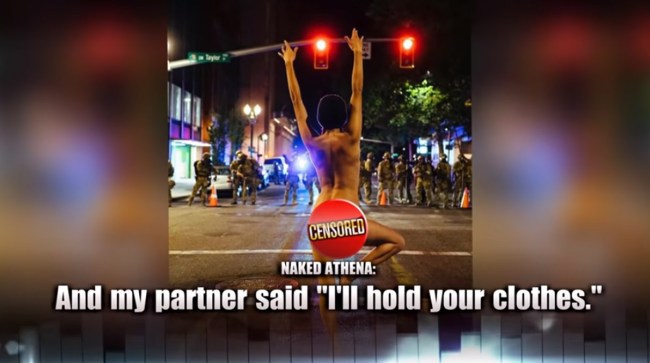 Two weeks ago during the ongoing protests taking place in Portland, Oregon, a women, later dubbed “Naked Athena,” appeared out of the crowd and approached the police, staring them down, and sparking a frenzy of questions on social media.

Who was that woman? Why was she naked? What message was she trying to send?

We now have some of the answers to those questions as she appeared this week on the Portland-based podcast Unrefined Sophisticates to tell her story.

The woman, who would only say her name is Jen and that she is in her thirties, told the podcast that after demonstrating all day, at almost 2 a.m., she came across this wall of law enforcement, “There was a very deep feminine place in myself that felt provoked. All the federal officers and cops, I looked at them and they stand there with this stance. Feet planted, shoulder width apart, arms at their side, chest up, head high, and it’s a warrior stance… and it’s not earned.

Wearing nothing but a mask and a hat, Jen was shot in the foot with a rubber bullet. After standing on one foot to show the police the blood that had been drawn, she sat down on the street, with her legs spread in what some surmised was a yoga position. It was not.

She added, “These protesters… the only thing we have in common is we have masks on and we’re out here at night. None of these people have weapons. Empty their pockets, take off their clothes. Nobody has weapons here. I just wanted them to see what they’re shooting at.”

It must have worked because Dave Killen, a photographer for The Oregonian whose photos of “Naked Athena” went viral, said the police ended up leaving about 10 minutes after her unusual and unexpected appearance.

As for why she decided to strip naked as part of her protest, Jen explained, “I’m notoriously naked. I just have been that way for several years now and there’s not anywhere that you can’t find me naked… I’m a sex worker and my nakedness is political. It’s my expression.”

She also explained that she kept her mask and hat on “because it was cold.”