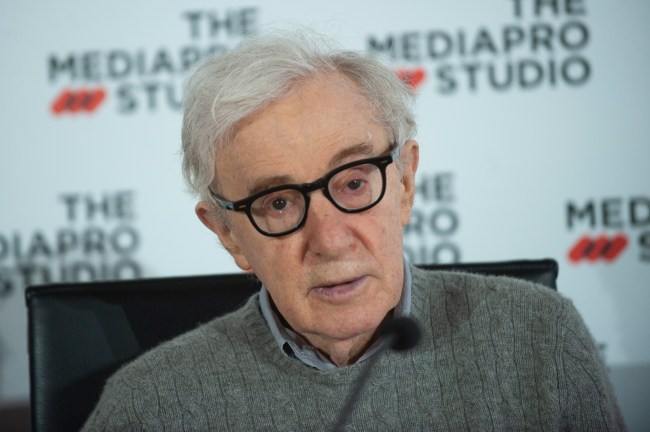 Once again, New York Post columnist Andrea Peyser looks like the frontrunner for take-quake of the year. This time, she’s dying on the Woody Allen hill with a steadfastness that would make General Custer smile in his grave:

It’s a riveting, yet strangely antiseptic, performance by an actress who’s made her life’s work exacting revenge from the man who done her wrong.

Trouble is, it seems to me that not a word of it, with the possible exceptions of “and’’ and “but,’’ is true.

And, once again, Mia’s scorched-earth revenge fantasy has claimed an innocent victim — her daughter, Dylan, who was allegedly brutalized by Woody when she was 7 years old. As she has done for decades, Mia is exploiting Dylan, now 35, maiming her mentally, throwing her under the Woody bus in a twisted effort to destroy the life, reputation and career of her former paramour.

Now, I haven’t watched the new HBO Farrow-Allen doc. It’s not exactly “wind down” material at the end of another long, bleak pandemic weekday. But before we get in to Peyser’s defense of Allen (really, it’s an attack on Mia Farrow), let’s take a look at her past work.

Andrea Peyser has made a career out of playing devil’s advocate. Hell, “advocate” seems generous, as though she’s merely the devil’s messenger when, in fact, her thoughts seem entirely… her own. Peyser’s columns for the NY Post consistently put forward takes so hot, you have to wear welding goggles just to keep your retinas from frying.

In 2001, Rupert Murdoch actually climbed out of his tree house to apologize for a Peyser NY Post column in which she referred to CNN’s Christiane Amanpour as a “CNN war slut.” The next year, Peyser wrote a column damning the Central Park 5 six months after the real attacker came forward, admitted his crimes, and exonerated the five. And in 2013, about Obama’s visit to the Nelson Mandela memorial service, she wrote this:

The president of the United States, leader of the free world, standard-bearer for everything upright, good and wholesome about the nation he leads, lost his morality, his dignity and his mind, using the solemn occasion of Nelson Mandela’s memorial service Tuesday to act like a hormone-ravaged frat boy on a road trip to a strip bar.

In front of 91 world leaders, the mourning nation of South Africa and Obama’s clearly furious wife, Michelle, the president flirted, giggled, whispered like a recalcitrant child and made a damn fool of himself at first sight of Denmark’s voluptuously curvy and married prime minister, Helle Thorning-Schmidt.

When you take a broader view of Peyser’s body of work, it loses its venom. You know the old saying? “Offend me once with your scalding hot take, shame on you. Offend me for 31 years with your scalding hot takes, shame on me.” Peyser has been setting forest fires on the pages of the New York Post for my entire life. As such, this latest Woody Allen piece shouldn’t move me to pay it any mind.

But here’s what I don’t understand: HOW does she get away with this? How does “believe all women” not apply here? Why isn’t there a group of angry picketers standing outside Andrea Peyser’s house, decrying the alleged abuses of Woody Allen and his super questionable romantic history?

If I were to have written a piece defending Woody Allen, calling the accusations of sexual assault against him a “scorched-earth revenge fantasy,” my career would be toast. Obviously. But people seem to expect this from Andrea Peyser. This is what she does. Which makes me think that in order to get away with writing extremely incendiary, tone-deaf blogs, I just need to slowly, gradually increase the heat of my takes over the course of 31 years until I reach that coveted summit of writing: the untouchable, un-cancellable club. Where forums of politically-correct guardians don’t even bother to come after me anymore because what’s the point? That’s just Francis being Francis. There he goes again.

As far as what actually happened between Dylan Farrow and Woody Allen all those years ago, only they know. Which is yet another reason why it seems CRAZY to die on Woody’s hill.