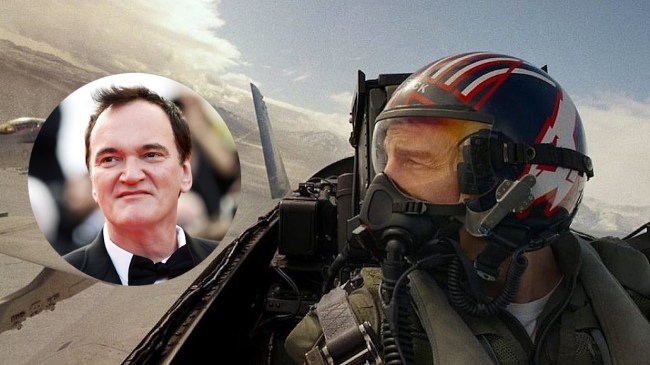 Given that he’s one of the most respected voices in the movie industry, writer and director Quentin Tarantino — filmmaker of classics such as Pulp Fiction, Inglourious Basterds, and Once Upon A Time In Hollywood — rarely gives public reviews of films, perhaps in an effort not to sway the opinion of the movie-going public.

When it comes to Top Gun: Maverick — the billion-plus-dollar-grossing savior of cinema that virtually everyone in the country has enjoyed — though, Tarantino was happy to share his glowing thoughts of the film.

During a recent interview with ReelBlend, Tarantino namechecked both Top Gun: Maverick and West Side Story as two recent films that provide “true cinematic spectacle.”

“I f***ing love Top Gun: Maverick. I thought it was fantastic. I saw it at the theaters. … That and [Steven] Spielberg’s West Side Story both provided a true cinematic spectacle, the kind that I’d almost thought that I wasn’t going to see anymore. It was fantastic,” Tarantino said.

“But also there was just this lovely, lovely aspect because I love both [original Top Gun director] Tony Scott’s cinema so much, and I love Tony so much that that’s as close as we’re ever going to get to seeing one more Tony Scott movie,” he continued.

“[Director Joseph Kosinski] did a great job. The respect and the love of Tony was in every frame. It was almost in every decision. It was consciously right there, but in this really cool way that was really respectful. And I think it was in every decision Tom [Cruise] made on the film. It’s the closest we’re ever going get to seeing one more Tony Scott movie, and it was a fucking terrific one.” [via ReelBlend]

While we’re still quite a ways away from next year’s Academy Awards, it’s beginning to feel increasingly likely that Top Gun: Maverick will, at the very least, be nominated for big awards like Best Picture and Best Director.

RELATED: Tom Cruise’s Earnings From ‘Top Gun: Maverick’ Have Been Reported And They’re A Doozy