For Those Of You Paranoid About Touching Your Face, Choke Down This Disgusting Face Fact 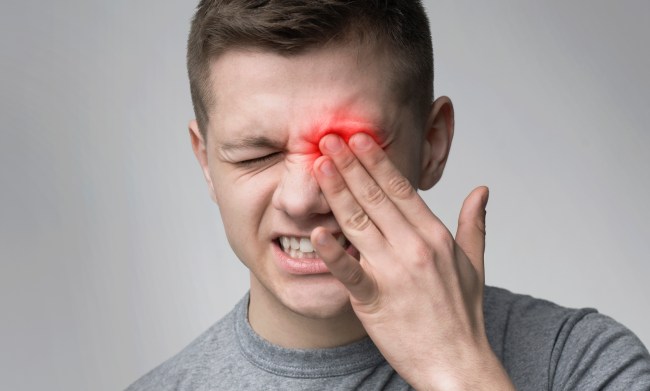 Don’t touch your face. Just don’t do it. Wash your hands all day long and sing the ‘Happy Birthday’ song while you’re doing it so you ensure that you’re washing long enough.

But then I stumbled past this disgusting fact that has me pretty much never wanting to touch my face ever again. In fact, I’m ready to cut my face off and donate it to science after having the curtains peeled back on this nasty ass reality.

I first came across this on Instagram where I was skeptical and did some research. Let’s dive right into it:

Surely there can’t be thousands of skin mites having sex every night on top of your face every night after you spent so many years as a virgin? That just doesn’t seem right, does it?? Well….this quote from an NPR article kind of sums it up:

“Face mites are definitely the species of animal that we have the closest connection with as humans, even though most of us don’t know about them or ever see one in our lifetime,” she says. “We still have this very ancient and intimate relationship, and it seems clear that we’ve had these face mite species with us for all of our history. So they are as old as our species, as old as Homo sapiens.”

To make a long story short, yes, there are skin mites having sex on your greasy face. I was hoping that this was a hoax but nope, it’s all true. Maybe not thousands at once but they’re certainly there. Here’s q quick clip from NPR that’ll drop more knowledge on you about skin mites than you’d ever want to know:

Some more information from the NPR article:

The mostly transparent critters are too small to see with the naked eye. At about 0.3 millimeters long, it would take about five adult face mites laid end to end to stretch across the head of a pin.

“They look like kind of like stubby little worms,” says Michelle Trautwein, an entomologist at the California Academy of Sciences in San Francisco.

Demodex face mites got their name from the Greek words for “fat” and “boring worm,” but they’re not really worms at all. They’re actually arachnids — related to ticks and, more distantly, to spiders.

Trautwein studies our relationship with these microscopic stowaways by looking at their DNA. Her findings suggest that people in different parts of the world have different face mites. “They tell a story of your own ancestry and also a story of more ancient human history and migration,” she says.

I love cruising into the weekend with the thought that there are microscopic skin mites humping like rabbits all over my face.

This is the exact nightmare scenario I had every time I’d drop acid and look int he mirror. Seriously. The first time I tripped balls my buddy was like ‘whatever you do, don’t go stare in the mirror’ so that’s exactly what I did and I was briefly convinced there was an entire world of microorganisms living on my damn face. As it turns out, things are worse than I thought when I was tripping balls.

For now, I hope this is enough of a reason to stop touching your face. But to learn more about these skin mites you can click here to read the NPR article in full.