‘Reno 911!’ Stars Give Insightful PSAs About Dangers Of The Holidays And Announce New Year’s Eve Special 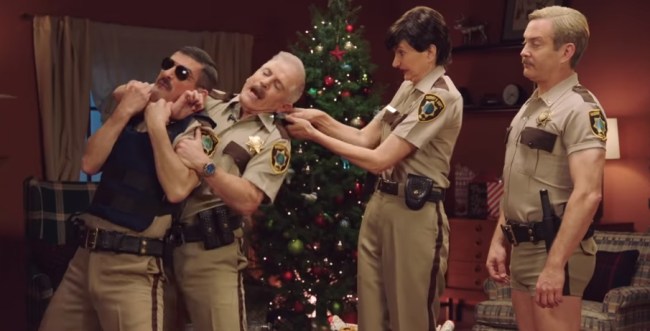 Reno 911! had a great run of 88 episodes from 2003 until 2009, but the fine folks of Reno, Nevada, still need their friendly neighborhood police officers to keep the peace in the streets. The stars of Reno 911! have returned to deliver some insightful PSAs about the dangers of the holidays and to encourage people to release any prisoners they are holding against their will in sex dungeons.

Deputy Trudy Wiegel (Kerri Kenney-Silver), Deputy James Oswaldo Garcia (Carlos Alazraqui), Deputy Travis Junior (Robert Ben Garant), and of course Lieutenant Jim Dangle (Thomas Lennon) are back to warn citizens about some of the possible pitfalls of the holiday season and how to avoid conflict during Christmas dinner with the family. Hint: It involves keeping your batteries charged on your taser. Comedy Central may have seen the unbelievable popularity of A&E’s Live PD and brought back the comedy show that mocked the TV show Cops.

“Once we’ve scarfed down our Christmas pudding and slipped into our house pants, the last thing we want to do is come break up a fight between you and your toothless cousin Ricky over who’s going to drive Grandma to her dialysis appointment next week,” Deputy Trudy Wiegel says.

The gang from Reno 911! not only return in these funny holiday PSAs, but will also star in a New Year’s Eve special. Comedy Central will air a Reno 911! marathon on New Year’s Eve that will run 37 episodes from 9 a.m. ET on December 31st until o 4:30 a.m. on Jan. 1st. There will be new Reno 911! comedy skits airing during the marathon of the Cops-inspired parody.

Here is another holiday PSA from the Washoe County Sheriff’s Department, this one from four years ago.