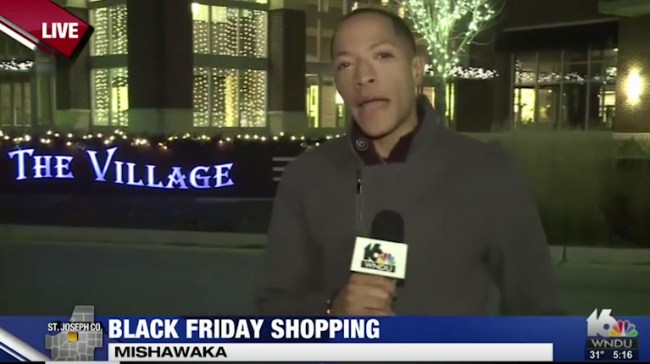 WNDU reporter Josh Short, as he vehemently tells everyone who watched him on Friday morning, woke up at 3AM to go to a mall in Mishawaka, Indiana to report on the Black Friday crowds. Once he arrived, he was not pleased with the turnout. At all.

First off, before Short even gets to the lack of a crowd, he’s already pissed off, “I thought I was going to be inside and apparently I’m STUCK outside because security reasons and all that other rigamarole.”

After that little rant, Short sarcastically shows the viewers the “long line of people” that was literally non-existent.

“I got up at 3 o’clock excited to do my first ever Black Friday and ain’t nobody here! I am literally upset right now. I don’t know why people did not wake up…they had too much food, I don’t know what the deal is,” Short exclaimed.

He continued, “We don’t have anybody out here. We got another news crew that I’m not going to name, SHE’S out here, so at the moment I’m going to send it back to you cuz ain’t nobody here,” he tells the anchor back in the studio. “I’m going back home, I’m going back to my bed, and I’m going to sleep.”

Then he just completely bails, on camera, after the anchor suggests the crowd might be on the other side of the mall.

Wow. He was definitely NOT happy. But hey, look on the bright side, Josh. At least you didn’t get up to early to spend Black Friday with this mob of maniacs.

Plus, who knows, maybe folks were still at home just kicking it online buying all the cool stuff we’ve been sharing the past few days (hint, hint).