‘Rise of Skywalker’ Novel Is Being Used To Explain Scenes From… ‘The Force Awakens’? 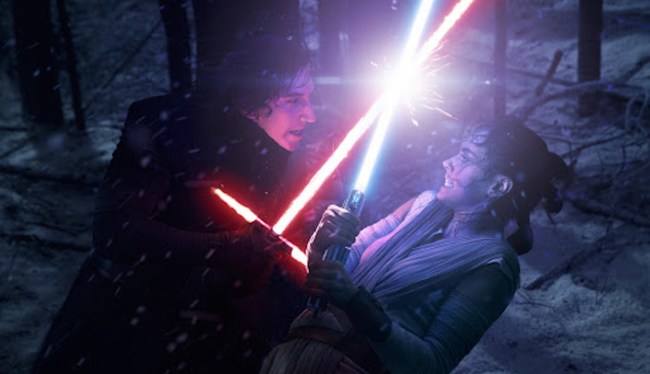 Good fucking lord, man. Enough is enough already with this god damn novelization. You know how Gambol snaps on Joker in The Dark Knight and yells in a blinding rage “enough from the clown!” That’s how I feel about this fucking novelization.

What seems like every couple weeks, a new passage from the book seems to hit the internet, each more ridiculous than the last.

In the last month alone, I’ve written three separate stories about the way Disney seems to be using this novelization to retcon the entire franchise.

One of them explains how Palpatine survived his very obvious death in Return of the Jedi. Another passage bizarrely goes out of its way to explain that Rey and Kylo’s embrace at the end was not romantic, but “a kiss of gratitude.” Then the third one explains, like, all those tubes and shit that Palpatine was connected to.

Now, as if they weren’t already in the weeds deep enough, apparently the book is being used to explain things that happened back in 2015’s The Force Awakens.

The Rise of Skywalker novelization by Rae Carson includes an extra scene where Kylo Ren interrogates an imprisoned Chewie (this was seen in leaked Rise of Skywalker concept art). The beginning of the passage reveals Kylo blames his Force Awakens injury for his humiliating loss:

“I have not forgotten that you shot me,” Kylo said. That wound had resulted in a defeat at Rey’s hands. Had he been in top fighting form, the scavenger never would have gotten the best of him. [via ScreenRant]

It’s rare to say this about a Disney product, considering they — more times than not — crush it out of the park, but they absolutely face-fucked this one pretty bad, huh?