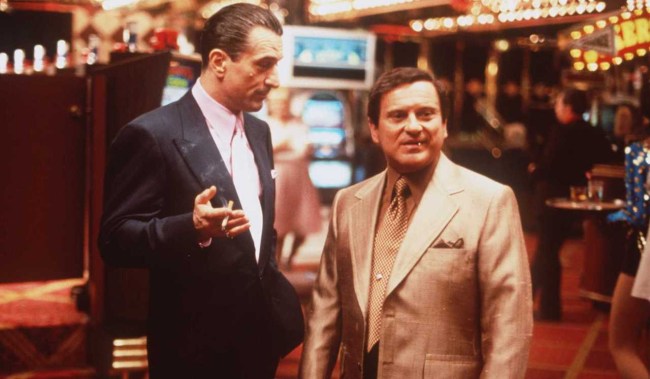 If you’re a film lover like myself, the impending release of The Irishman represents the end of an era, as it will likely be the final time that Martin Scorsese and Robert De Niro — arguably the defining director/actor duo of the last 50 years — work together.

And if you listen closely to the various legends involved with the project, they seem to be keenly aware of that fact, as the notion of this being one last go-round seems to be the driving force of the film. After all, it’s how they got Joe Pesci involved, who hadn’t appeared in a feature film since 2010 (since Casino in 1995, Pesci only appeared in five films prior to The Irishman.)

In fact, according to multiple reports, De Niro was so desperate to get Pesci involved in the gang’s last hurrah that he asked him over 40 times. FORTY.

But if it took more than 40 times to convince him, what did De Niro finally say to convince his old acting buddy to get back on the horse? He pointed out that they may never get this chance again.

“A lot of what I was saying was, ‘Come on, who knows if we’re ever going to have this chance again?’” De Niro says. “Let’s just do it. And he loves Marty and greatly respects him and knows that if he’s in Marty’s hands, it’s going to be okay.” [Entertainment Weekly]

Furthermore, Scorsese told EW that the “tipping point” for Pesci was when the film got legitimate backing from Netflix, therefore providing Scorsese with the money to use the de-aging technology he desired.

“When Netflix got into the picture — because then we had the backing,” Scorsese says when asked what was Pesci’s tipping point. “It’s not even about the money or about being compensated and appreciated for your value. It’s about the physicality of [making a film] where nobody’s giving you anything. At a certain age and physicality for the actors, it may not be worth it.”

With clear passion for the project from its creators and rave reviews from critics thus far, it appears that The Irishman is going to live up to the hype and then some.

The Irishman is set to be released in select theaters on Friday, November 1 and on Netflix on Wednesday, November 27.