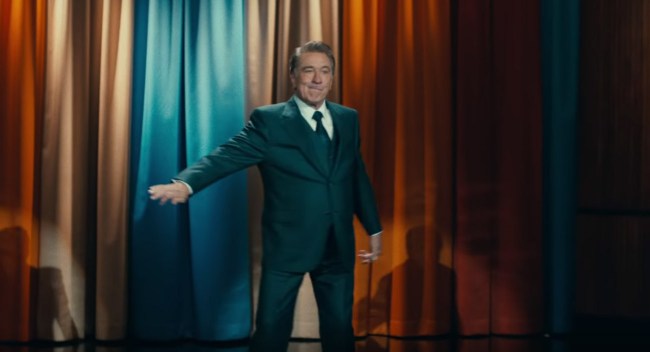 The first trailer for the upcoming Joker movie starring Joaquin Phoenix as The Clown Prince of Crime was released on Wednesday and proceeded to blow people away with how chilling and dark the film appears.

The movie, directed by Todd Phillips (Old School, The Hangover), not only has an Oscar winner in the lead role, but the rest of the cast is impressive as well with Zazie Beetz, Frances Conroy, Marc Maron, Bill Camp, and another Academy Award winner in Robert De Niro.

In Joker, De Niro will be playing talk show host Murray Franklin, and might look a little familiar to fans of the actor.

For you see, the movie is set in 1981 and sees the future Joker, Arthur Fleck, trying to make it as a stand-up comedian.

If that sounds a lot like The King of Comedy, it should, because De Niro says the character of Murray Franklin is a direct homage to that movie’s main character Rupert Pupkin.

In an interview with IndieWire, De Niro confirmed that his role was a nod to that earlier performance.

Released around the same time that “Joker” takes place, “The King of Comedy” stars De Niro as psychopathic comic Rupert Pupkin, a man obsessed with a popular TV host (Jerry Lewis). The story concludes with Rupert landing his dream gig after a stint in jail, though many viewers have interpreted that conclusion to be a fantasy. Regardless of where Rupert really wound up, however, De Niro said that Murray was conceived in the spirit of his earlier role. “There’s a connection, obviously, with the whole thing,” said De Niro, from his Tribeca offices, while doing interviews for the upcoming Tribeca Film Festival. “But it’s not as a direct connection as the character I’m playing being Rupert many years later as a host.”

Nevertheless, De Niro said he would have been up for reprising the character in more explicit terms. “If they would’ve proposed that to me, I would’ve said, ‘That’s interesting, maybe we’ll try to do that,’” he said. “But by making this type of film, it is connected in a way, as you’ll see.”

Annnd now we have one more reason to want to go and see this film. Thanks, Bob.