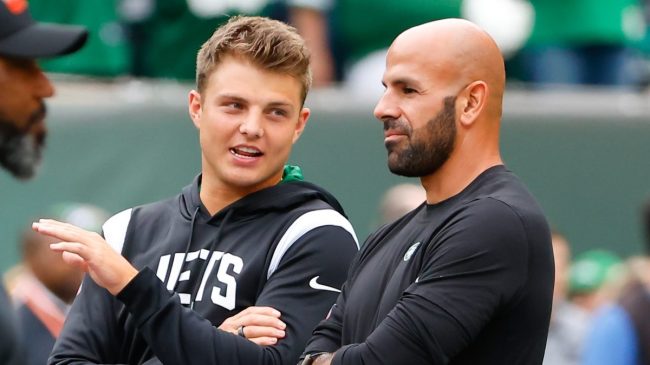 On Wednesday morning, New York Jets head coach Robert Saleh officially benched former #2 overall pick Zach Wilson in favor of Mike White. Not only that, but Saleh said that Wilson would be entirely inactive for this weekend’s game against the Chicago Bears.

In addition to confirming Wilson’s status for the weekend, Saleh also addressed speculation that Wilson has “lost” the New York Jets locker room as a result of his attitude and Saleh certainly didn’t say no. In fact, he actually tried to add context to the situation by saying that they don’t “hate” Wilson, which is a shocking statement in and of itself.

“Maybe there’s a little irritation at the moment,” Saleh said of Wilson’s current standing in the locker room. “But I don’t think there’s hate.”

Robert Saleh on the notion Zach Wilson lost the locker room: "Maybe there's a little irritation at the moment (…) but I don't think there's hate." #Jets

Wilson’s performance on the field and attitude off of it has put Saleh in a difficult position as he’s now been forced to choose between the potential (although unlikely) franchise QB and the rest of the team, who are in the midst of a playoff race with a 6-4 record. Not only did the Jets offense have more punts than completions against the Patriots on Sunday, but Wilson made matters worse by taking zero accountability in his post-game comments.

.@Connor_J_Hughes: "Do you feel like you let the defense down at all?"

If the Jets were one of the league’s worst teams, then perhaps they could keep trotting Wilson out there, but the fact is the franchise currently owns the league’s longest playoff drought and has a legitimate chance of ending it this year thanks to their borderline elite defense.

Heading into Week 12, the Jets trail the Cincinnati Bengals for the 7th and final seed in the AFC Playoffs. To close out the season, New York will face off against the Chicago Bears, Minnesota Vikings, Buffalo Bills, Detroit Lions, Jacksonville Jaguars, Seattle Seahawks, and Miami Dolphins.

RELATED: Bill Belichick Thinks So Little Of Zach Wilson That He Spent Time Preparing For The Vikings Ahead Of The Jets Game