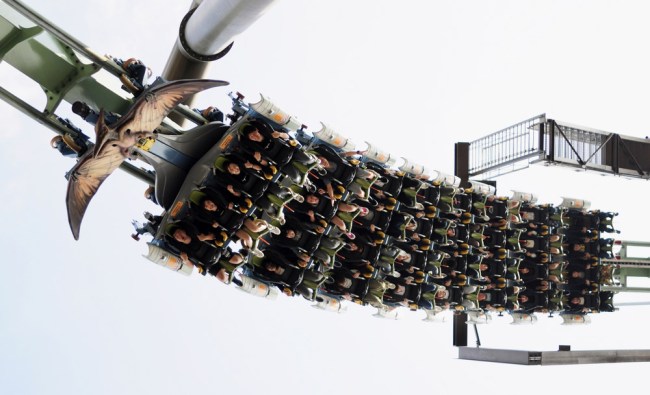 What happened at Universal Studios Japan in Osaka on Tuesday involving their Jurassic Park-themed Flying Dinosaur roller coaster ride may make you think twice about hopping on a coaster the next time you visit an amusement park. That’s because the coaster, which was carrying around 60 riders, stalled mid-loop and suspended all of them upside down for two freaking hours.

And here we thought the dinosaurs at a Jurassic Park attraction would be the most frightening part of the visit.

No injuries were reported among about 60 passengers on the Jurassic Park-inspired Flying Dinosaur roller coaster after two carriages suddenly got stuck at around 4:45 p.m., the theme park said.

The roller coaster had similar issues during operation in August and September last year.

One carriage halted about 20 to 30 meters [65 to 98 feet] above the ground on its upward track while the other stopped just before reaching the terminal.

Japanese newspaper Asahi Shimbun filmed the scene from a helicopter which showed just how flipping high all these people were left hanging.

Of course, this being Japan, the Times also reported that “despite the incident, many people lined up to ride the roller coaster as soon as operations resumed shortly after 7 p.m.” Because of course they did.

Check out video of the rescue operation below and then never go on another roller coaster again.