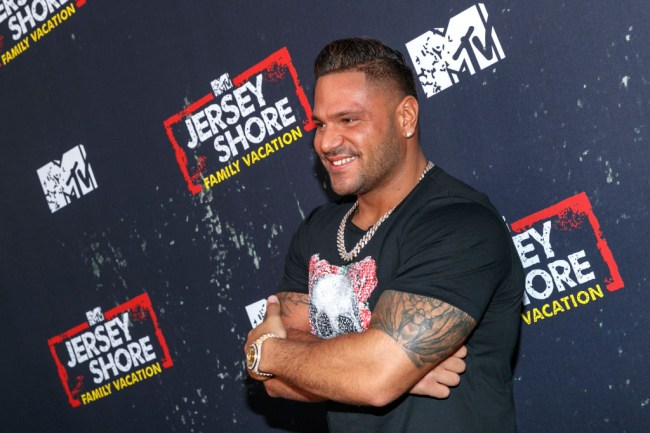 Ronnie Ortiz-Margo was granted an emergency order for protection against domestic violence after his baby mama allegedly attacked him last week. The Jersey Shore star claims that he requested the restraining order because Jen Harley reportedly bruised him after she entered his home while he was sleeping.

Ortiz-Margo alleges that his ex-girlfriend arrived at his Las Vegas home last Saturday night. Harley allegedly sifted through Ronnie’s trash and found another woman’s makeup in the trash. That discovery reportedly caused Harley to become enraged, and she burst into his house.

A TMZ source claims that Jen tried to poke Ronnie in the eye and hit him in the face several times. The report alleges that “Ronnie had cuts and bruising on his face and swelling under his right eye.”

“Regrettably, on Saturday night, Ronnie Ortiz-Magro was, again, the victim of a domestic violence incident at the hands of Jennifer Harley,” the 34-year-old Jersey Shore: Family Vacation star’s attorneys, Scott Leemon and Leonard Levine, told TMZ. “At that time, Ms. Harley entered his home while he was sleeping and started viciously assaulting him.”

“Ronnie immediately called the Las Vegas Police Department and filed a domestic violence complaint against Jennifer,” the lawyers’ statement read. “Then, this morning, a Family Court Judge in the Clark County (Las Vegas, NV) District Court, Family Division granted Ronnie an Emergency Order for Protection Against Domestic Violence. This Emergency Order is in effect until February 25, 2020.”

Harley’s attorney Lisa Bloom said that her client has yet to be served with the restraining order, but if she is, it will be opposed, according to People.

“Contact that Ronnie Ortiz had with Jenn Harley recently was in violation of the restraining order in effect against him,” Bloom communicated in a statement. “We have not received any restraining order against her, and if Jenn does get served with one, we will oppose it. Jenn just wants to raise her baby in peace.”

This continues the disturbing timeline of Jen and Ron assaulting each other. In December, Harley shared photos of bruises on her body and a black eye, which she alleged were from a physical altercation she had with Ronnie in October. Nicole “Snooki” Polizzi questioned the motives of the photos and defended her Jersey Shore castmate.

“I am standing up for myself & my daughter and everyone else this person has been trying to hurt over the last week,” Ronnie wrote in an Instagram Story post in December. “Upset because I’ve moved on with my life. I refuse to be bullied!!! I am a great father, an amazing person! I’ve been harassed for the last 2 weeks, people I care about being harassed about fake stories being made up! Let’s [sic] the world know the truth!!”

On October 4, Ronnie was arrested and charged with seven misdemeanor charges of domestic violence and child endangerment, including false imprisonment, which he pleaded not guilty. The scary domestic violence situation is where Ronnie allegedly attacked Harley, then wielded a knife, barricaded himself in a room with his daughter at an Airbnb in Los Angeles. Harley got a restraining order against Ronnie, and he was ordered to stay 100 yards away until October 11.

Ronnie accused Jen of domestic battery after she allegedly threw an ashtray at his head at a New Year’s Eve party in Las Vegas over a year ago. Ronnie was bleeding and had visible injuries on his face. Last July, Jen was cleared of any wrongdoing.

In January of 2019, Ortiz-Margo was named as a “person of interest” in the robbery of Harley’s home. Video of Ronnie punching and smashing the Ring home security camera at Jen’s Las Vegas home also was released at that time.

Maybe Ron and Jen should try to limit their communication to the bare minimum and cordial for the sake of their daughter. For more Jersey Shore news click HERE.